The Plague of Nakugard, Part 2

Previously, on MinerBumping... Agent Alt 00 brought healing to the Nakugard system, which was infested with bot-aspirants. But many of the miners did not wish to live in a happier, healthier system--and they hated Alt 00 for improving the place. 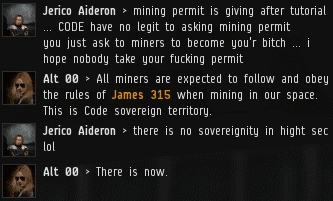 Our Agent was not discouraged by the presence of bot-aspirant miners; she saw each of them as an opportunity for another of her victories.

The miners continually failed to win the argument, but neither were they persuaded by Alt 00's good sense. When words did not move the miners, antimatter removed them. 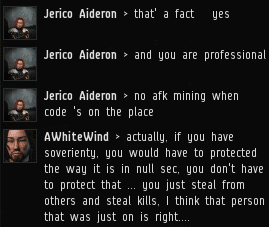 Not even the most stubborn miner could deny that the mighty CODE. alliance was enforcing its rule upon the carebears. Yet some miners whined about irrelevant in-game sov mechanics. 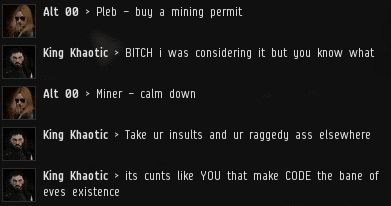 Typical "I was going to buy a permit, but now I won't" miner. You can tell how close he was to obeying the Code!

Agent Alt 00 continued to score victory after victory in Nakugard. But as February came to a close, a sinister shadow fell upon the system: 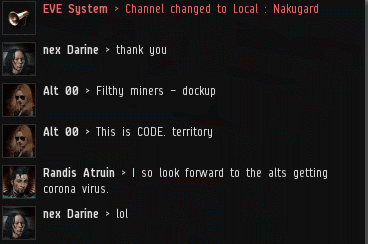 Increasingly, miners like Randis Atruin began to make references to the coronavirus. 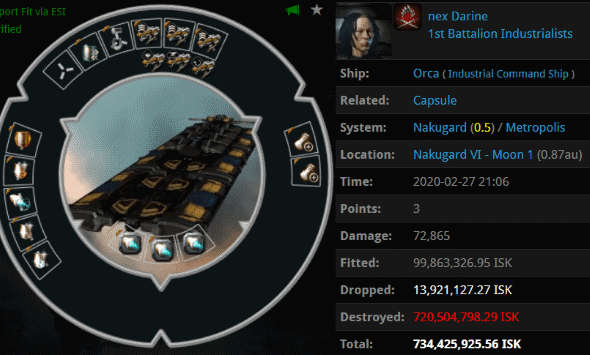 nex Darine was punished for laughing at the inappropriate remark.

Even still, nex refused to obey the Code. He chose to wallow in filth and lose more Orcas (if he had any). 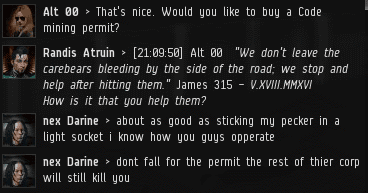 Perhaps nex Darine was nudged toward the dark side by his fellow bot-aspirants...

After all, when a weak-willed miner keeps company with the likes of Randis Atruin, nothing good can come of it. 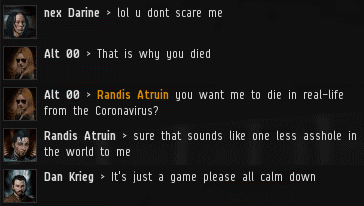 Our Agent was familiar with contagions and pestilence. She had successfully fought against these things many times before. 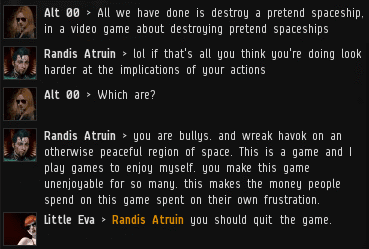 If there was a way to defeat the plagues of bot-aspirancy and the coronavirus at the same time, the Agents of the New Order would be the ones to do it.