When carebears lose their stuff in highsec, they often file petitions. What people may not realize is that a lot of those petitions don't get sent to CCP. 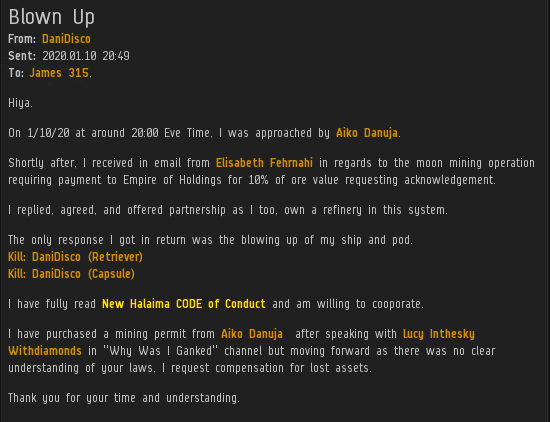 ...They get sent to me. Over the past several months, I have noticed an uptick in the number of reimbursement requests. In one way, that's a good thing: More carebears are dying. 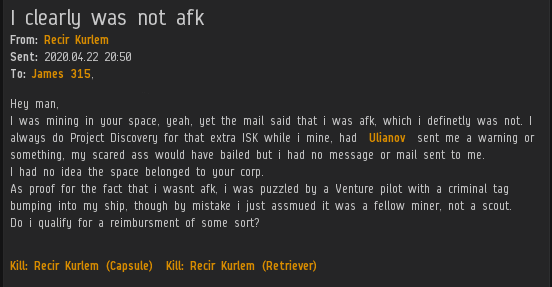 A pessimist would say that the increase in reimbursement requests is a reflection of the miners' sense of entitlement--and their ignorance of the Code. For example, Recir Kurlem apparently didn't realize that focusing on Project Discovery while mining is a violation of the Code. He literally admitted to violating the rules while asking me for money. 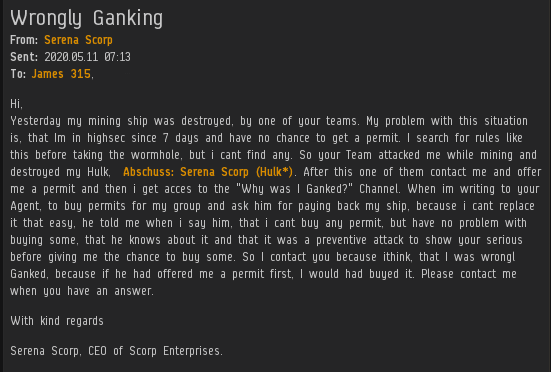 Regardless of the reason for the spike in reimbursement requests, I make a reasonable effort to address them, as I'm doing right now. Serena Scorp, you say that you had no chance to buy a permit. Yet you had the time and resources to become the CEO of your very own corporation. Don't you know that you should become Code-compliant first, so that you will be able to provide a good example if you ever recruit anyone to your corp?

Since your question is about CCP's rules, I invite you to file a petition with a GM. I wouldn't want to step on anyone's toes.

You were "just blowing through" to your home system? That's a fancy way of saying you were AFK autopiloting. Is that what the kids are calling it these days? 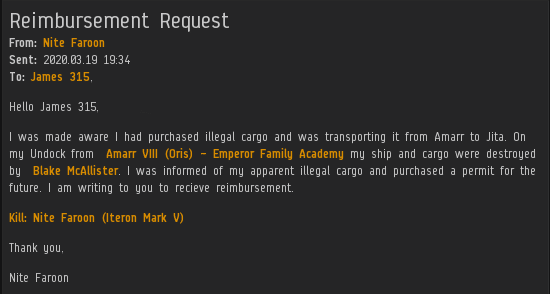 It looks like you made a mistake by buying a permit "for the future". You're asking me to reimburse a loss that occurred in the past. 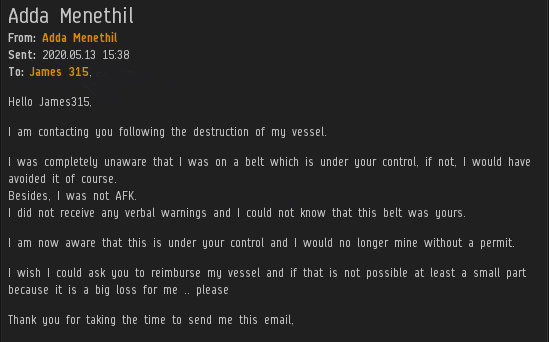 I never sent you an email.

Have you tried asking for reimbursement?

Why wasn't your corp member aware of my action? Was he AFK? Is he still?

I'm afraid I must decline your request. Illegally mined ice isn't supposed to be moved through highsec. And certainly not through Uedama! 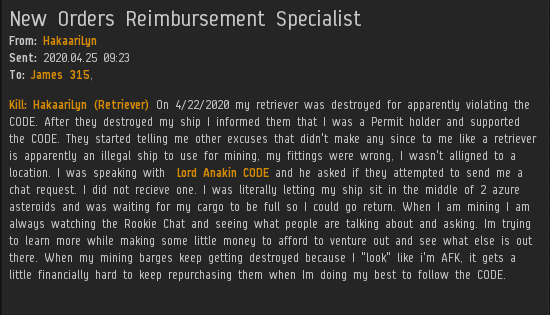 Nice block of text, but you failed to adequately bury your confession. You admitted to "always watching the Rookie Chat" while mining. The Code requires you to pay attention to your surroundings.

No, friend, you didn't lose 40 million to my cause; you lost 40 million to your own cause. If you had been supporting my cause--if you had obeyed the Code--you would have avoided destruction. Instead, you chose greed and laziness. You were punished for it. That is justice.

Your reimbursement request is denied. Would you like to buy a permit?
Posted by MinerBumping at 18:05