Looks like it's time for another edition of the Highsec Miner Grab Bag to ensue!

Too bad this miner wasted his 5 seconds by writing a tearmail instead of replacing his stuff.

I wonder what would happen if that screenshot ever did make its way to a GM. Actually, they probably wouldn't find fault with the miner's language. But that's why highsec needs Code enforcers to keep the miners in line. 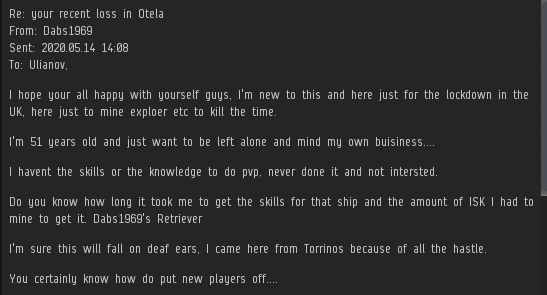 Excuse me, but where does the Code say that its rules may be violated in the event of a lockdown? If anything, order and civilization become even more important during a crisis.

They may call our Agents "tororists", but they really mean rock stars. Ganking miners is a good way to become famous in EVE.

"You're so bad at EVE that you always defeat me easily." 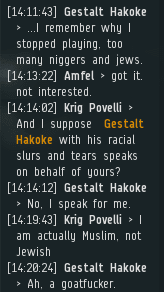 Another example of a "new returning player" who wasn't any better the second time around.

How did you miss this post when you've had nearly 6 years to read it?

A question for anyone who belongs to the "protect our precious newbros" crowd: At what point do you think an EVE player is ready to lose his first ship?

I don't know what PROJECT 32 is, but I have a feeling it already failed.

marvelgold Riraille shouldn't be so surprised. After all, our Agents do the impossible every day.

Seems like Grixer Noxtlus is doing just fine. But I'm not so sure about you, miner.
Posted by MinerBumping at 18:04