The Plague of Nakugard, Part 3

Previously, on MinerBumping... Agent Alt 00 had high hopes for Nakugard. She dreamed that the system would one day reach its full potential. But Nakugard faced a threat: Filthy, disgusting miners. 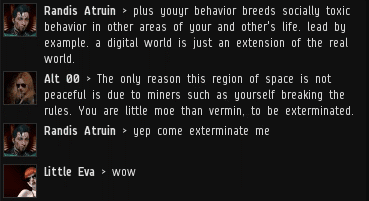 Alt 00 had a reputation for being tough but fair. It was well earned.

When our Agent observed imperfection in the system, she moved quickly to correct it. But some miners do not take criticism--or antimatter--with grace.

With no way to fight back against an Agent armed with the Code, the miners resorted to angry outbursts in local. But these proved to be as ineffective as the miners' paper-thin tanks.

By now, the bot-aspirants understood that Alt 00 wasn't simply going to get bored and go away. They would have to deal with her or leave the system. 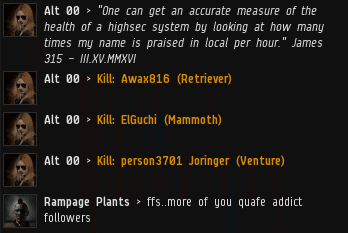 Those who remained in Nakugard were destroyed. Only miners who saw the light and obeyed the Code were able to survive. 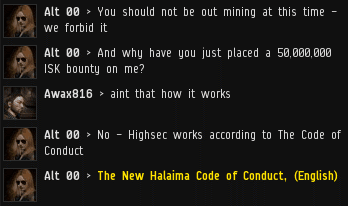 Considering the power of Alt 00's gank fleets, Code compliance seemed like the obvious choice. However, some miners felt that mining was only worth doing if it could be done AFK. The Code was incompatible with their bot-aspirant lifestyle.

By March, Nakugard local chat saw a sharp uptick in the number of references to the coronavirus. And our Agent feared that the miners were not practicing proper hygiene.

Alt 00 reasoned that the best way to improve the health of the system was to remove all sources of negativity. This meant killing more miners.

Nolm Redneval was caught violating the law. Instead of apologizing, he raged. As though it was our Agent's fault that Nolm was bad at EVE.

According to Nolm, highsec was supposed to be a place where spaceship combat didn't take place. But Alt 00 knew where that reasoning would lead: EVE's entire population would be dragged down as all of the PvE'ers went to highsec for automated isk-grinding in total safety.

Other miners in the system cautioned Nolm against behaving this way. Even fellow gank recipient Jake Astora told him to stop whining.

With everyone in Nakugard encouraging Nolm to improve his behavior, the miner had no excuse for continuing his temper tantrum. It was time for him to calm down, grow up, and obey the Code. But would he?