Previously, on MinerBumping... Highsec miner zesa confessed to multiple crimes of bot-aspirancy. His mining operations relied entirely on the ability to mine AFK. Worse yet, he was building capital ships for the purpose of PvE'ing in lowsec. He admitted that his refusal to engage in PvP kept him from joining a nullsec alliance. 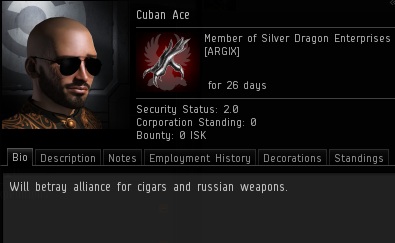 Agent Cuban Ace was zesa's white knight. Having established a rapport with the bot-aspirant, Cuban would do everything he could to save zesa--and the carrier zesa intended to enslave.


zesa > the last corp I was in was in close proximity to the germans and russians and they were always attacking us and the ceo kicked my out because I just wanted to rat
Cuban Ace > Dont worry about htat :)
zesa > the corp that I am in now, I am the only active player
Cuban Ace > Wanna try joining mine for a bit ?
Cuban Ace > Until you find another corp

Despite his misgivings about zesa's carebearism, Cuban was willing to give zesa a chance to join his own corp. Maybe being surrounded by people would remind zesa that EVE isn't about PvE.


zesa > where are you based?
Cuban Ace > NOwhere really, i follow incursions by moving my carrier around
zesa > you like incursions
Cuban Ace > Yes :)
zesa > cool, a carrier might handle most of the incursion ships
zesa > I don't have a lot of experience actually flying a carrier. like I said most people that come across them want to destroy them
zesa > I only have smartbombs and fighters on my chimera and it's gimped

zesa's secrets poured out of his mouth. He admitted that he didn't know how to fly his carrier. He could only leave it to the fate of every carebear's ships--gathering cobwebs in station.


zesa > I only have a few hours a day that I can play and still keep a happy household
zesa > I just lost my ceo in swtor because his wife her or the game his choice
Cuban Ace > Too bad
zesa > yes and mine is just as bad. She will put up with my gamming until she wants to do something and then i need to leave at a moments notice
zesa > thats why I stay mostly in empire. I don't get into something that will tie me up
Cuban Ace > you'll never get tied up in lowsec ^^

As Cuban listened patiently, zesa continued his confession. In great detail, he explained all of the ways he'd justified his AFK lifestyle to himself.


Cuban Ace > well, if you want to find another friendly eve community, you can join mine :)
zesa > interesting, let me think about it
Cuban Ace > If you're interested, just apply :)
Cuban Ace > We'll sort the rest out later
zesa > who do I apply to?
Cuban Ace > Silver Dragon Enterprises 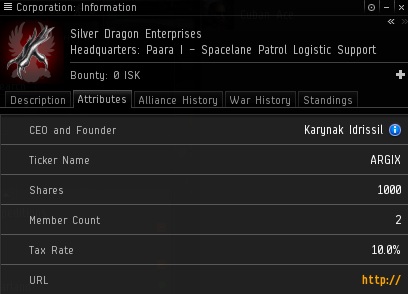 To be sure, Cuban's corp, Silver Dragon Enterprises, was on the small side. Its only other member was its CEO Karynak Idrissil, whose name bore a striking resemblance to Neltharak Idrissil, one of the first EVE players ever to heed the call of the New Order.


zesa > what time zone are yon in?
Cuban Ace > EU/early US
zesa > I am in est time so about the same
Cuban Ace > yep :)
zesa > I started out in a corp based in Belgium until the ceo had a nervous breakdown and they disolved it
Cuban Ace > My carrier is in Kinakka right now
zesa > I would have to jump there and that is something I haven't done in a long time I don't even know if I have jump fuel on it.
Cuban Ace > i can bring you some and light cynos for you, its no big deal :)

Cuban and Karynak welcomed zesa into corp chat with open arms. But there was no time to waste: They needed to do something about zesa's carrier.


zesa > until I get familiar with what you are talking about I would just prefer to move the chimera
Karynak Idrissil > How do you want it moved ?
zesa > it's been a long time since I have jumped anywhere
Karynak Idrissil > It's probably better if you let us light the cynos then
Karynak Idrissil > if you light it wrong, it can send you flying into space
Cuban Ace > Zesa, do you want to make the jumps yourself or do you want me to pilot your chimera ? I can do both, it just depends on your confidence :)
zesa > It might be better if you did it I have never jumped this ship and it has been a few years since I have jumped anything

Years of bot-aspirancy atrophied all of zesa's piloting skills. He didn't even know how to jump his Chimera, because he intended to sit in the same system every day and rat. So the task of jumping the carrier would fall upon Cuban's shoulders. 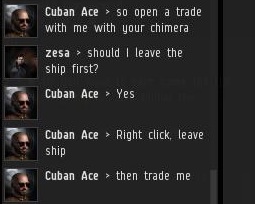 Cuban hurried to zesa's system. Once in station, he urged zesa to set the carrier free. 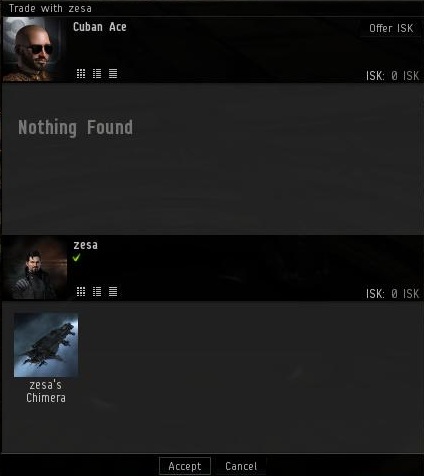 In an instant, the ship dubbed "zesa's Chimera" had a bright new future. It wouldn't languish in the asteroid belts and anomalies ever again.

In an unguarded moment, zesa let slip the fact that he had a dreadnought mothballed in the station, as well. Karynak was stunned.


Karynak Idrissil > we could bring him to that right now, if he wants
zesa > I don't think I could do it today momma wants to leave in a bit
Cuban Ace > No sweat, we could get your dread in system so its ready for you :)
zesa > the moros is equipped but I have never flown it except around this systen when noone was here
zesa > bio break be back
zesa > back I have moros equipped to destroy stations and other ships
zesa > if you want to jump the moros to kin come on down
zesa > bring fuel and I will reimberse you
Cuban Ace > on my way

Cuban's rescue mission became even more urgent. He needed to get the Chimera to safely, and then return for the Moros as quickly as he could. 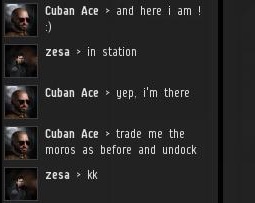 Luckily, zesa's wife was nowhere to be seen, and zesa was able to remain online until Cuban returned. 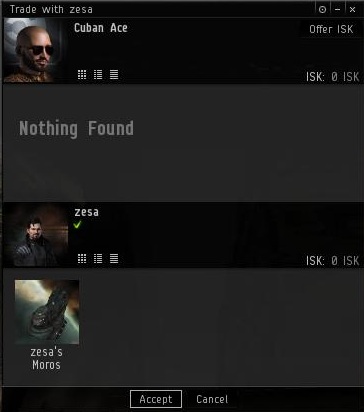 Another capital ship saved by the New Order! Cuban and Karynak were overjoyed.

Cuban concluded his report. In the end, zesa and Silver Dragon Enterprises didn't prove to be a good fit, and zesa's membership in the corp only lasted a few hours. But those were the finest hours zesa ever spent in EVE. To my knowledge, he never thanked Cuban, but zesa should be forever grateful.
Posted by MinerBumping at 21:56