In a bold effort to improve the Kino system, I began bumping miners. Rebel Dr Robotnik-x attempted to thwart my bumps by yellowboxing me with his Drake. When that failed, he called for the miners to unite into a resistance movement. However, the resistance fell apart when the miners could not be roused from their bot-aspirant slumber.

Baxter Tsero, one of Robotnik's most outspoken friends, continued to speak ill of the Order. Then, suddenly...

I warped into the next asteroid belt and saw Baxter mining away in his Retriever. It's always a fine thing when I stumble upon the louder rebels. 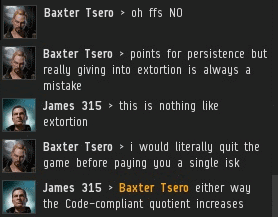 Correctly fearing that bumps were imminent, Baxter retreated to the station. He would not mine again in my presence. 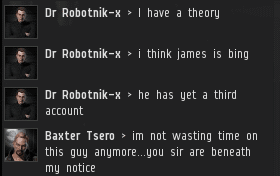 Meanwhile, Robotnik came to an epiphany: Was the Father of the New Order merely an alt of Agent Bing Bangboom? 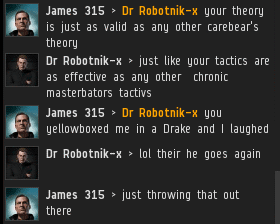 The delusion that New Order Agents are merely my alts can be traced back to the early days of the Order. It was a more popular belief back then, since there were fewer Agents. 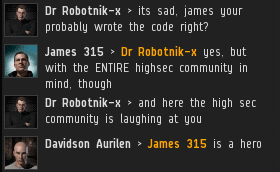 Robotnik suddenly realized that if Bing and James 315 were the same person, perhaps that person was also responsible for the Code. As he peddled his conspiracy theories, Robotnik faced stiff resistance from the New Order loyalists in local.

Robotnik's embarrassing past came back to haunt him. Though his Drake had been docked for several minutes, he couldn't escape the stain it had left on his career as a rebel leader. 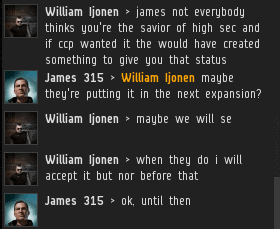 Still dizzy from being bumped, William Ijonen engaged me in conversation about potential expansion themes. CCP's running low on ideas, so why not? More people come to EVE for the New Order than for ship rebalancing. 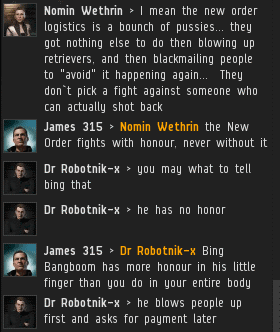 Robotnik renewed his complaints about Bing. But did he really think he was talking to Bing's alt? 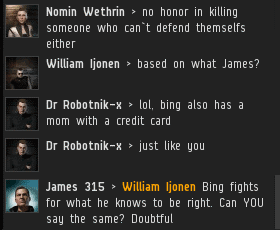 I questioned the rebel miners: Could they criticize the war records of the Knights of the Order, when they themselves had never served highsec? 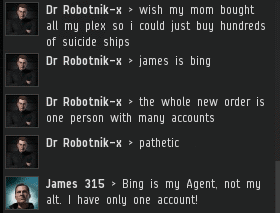 After some hesitation, Robotnik decided to go all-in on his conspiracy theory: Every single Agent of the New Order, and presumably every Code-compliant miner who pledges loyalty to the Order, are alts of one man. One man with hundreds, perhaps thousands, of accounts! 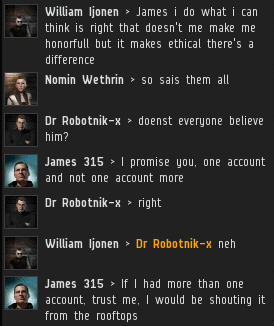 Grasping for any explanation for the Order's rise--other than the powerful appeal of the Code--the rebel miners gravitated toward denialism. I tried to reason with them. In truth, I do not pay for hundreds, or even dozens of subscriptions. I have only one account. The Agents of the Order are not my alts, nor are the shareholders and countless other supporters of our cause.

In a comment to Part 3 of this series, Robotnik confirmed his belief in the alt theory. It may be stunning to see this level of insanity take hold among the miners in highsec, but consider the perspective of the bot-aspirant: They're used to seeing armies of multi-boxing miners. They're not used to seeing real people work together.

Would Kino be lost forever to the madness of denialism, or could the Saviour of Highsec open their eyes?