Turn Those Tears Upside Down 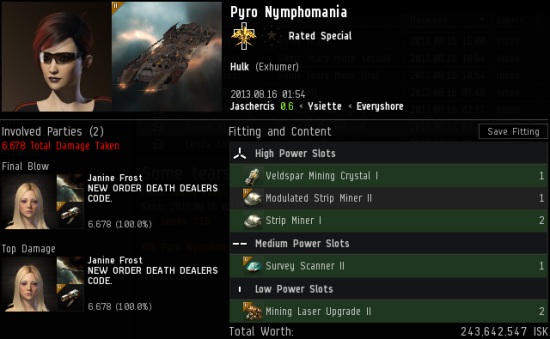 Pyro Nymphomania, a humble carebear, was caught illegally mining in one of my systems. Agent Janine Frost did the responsible thing and killed her untanked Hulk. Little did Pyro know, it was the best thing that would ever happen to her. So Janine told her so: 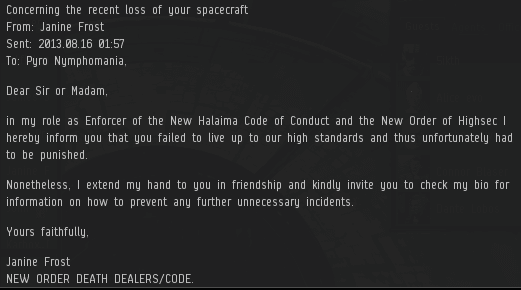 Unlike some other EVE players I could mention, Agents of the New Order are courteous, polite, and professional. They don't gloat about their many, many victories. Nor do they insult the dull, wretched masses of carebeardom. Instead, they help 'em out.

Pyro replied with an extraordinary EVEmail. She thought Janine was hacking, because otherwise, how could someone kill an untanked Hulk in highsec? Before Janine could defend herself, Pyro sent two additional EVEmails:

Protip: If someone tells you, "I'm not only [Something]", they are, in fact, only that Something. Needless to say, Pyro's threats didn't bear fruit. Since the miner was unable to chase Agent Janine out of EVE, she extended Pyro another invitation to obey the Code.

Pyro remained defiant. But Janine saw a glimmer of hope: Pyro suggested that she might tank her mining ship next time. 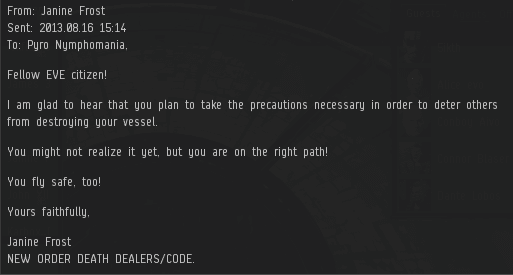 New Order Agents are always of good cheer. Janine congratulated Pyro on her decision to trade yield for tank.

Though progress was being made, you can't expect a miner to be cured instantly--not after they've suffered years of ignorance and bot-aspirancy. Pyro's mind was addled by all the Goon conspiracies she'd heard over the years. 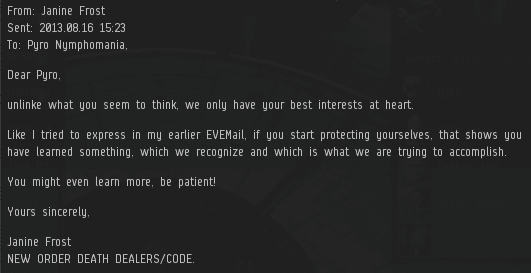 Janine became Pyro's champion. She cheered her on, encouraging her to become a proper EVE player. Did Pyro have the courage? 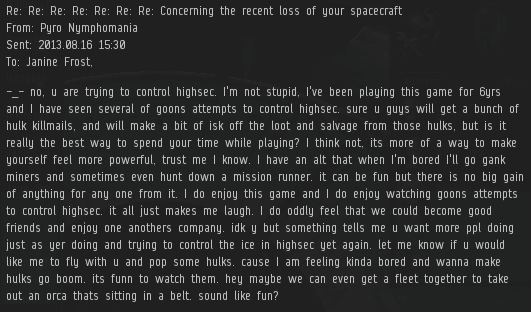 While still showing signs of anti-Goon prejudice, Pyro was opening up her heart. She expressed a willingness to gank miners. She even claimed that she had ganked miners in the past. (Though one wonders, if she knew how ganks worked, why she thought Janine was hacking.) Janine cheerfully invited Pyro to join the NEW ORDER DEATH DEALERS corporation so she could be raised as a ganker in a loving environment.

There you have it. In just a brief series of EVEmails with a New Order Agent, Pyro Nymphomania achieved a remarkable degree of improvement. Most people would have judged Pyro a raving lunatic bot-aspirant and left her to rot in the belts. The New Order isn't wired that way. Mercy: It's not just a good idea--it's in the Code.
Posted by MinerBumping at 18:16