On the Beat in Kamio, Part 2

Previously, on MinerBumping... A group of Agents encounted alexhunter seyah mining ice without a permit. After they destroyed his ship, he began cycling rapidly through the stages of miner grief. Our heroes encouraged alexhunter to give up carebearism and to start living as a man.

The first step in alexhunter's rehabilitation was to make him aware of the Code. This is really something alexhunter should have taken care of for himself before he started playing EVE, but it's never too late.

alexhunter claimed innocence on a technicality: Because his ice harvesters hadn't finished a cycle before he was killed, he never mined any ice. 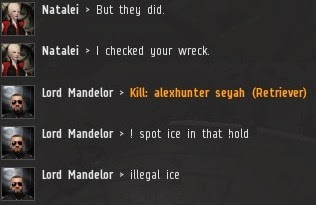 ...But the Agents of the New Order are not so easily fooled. 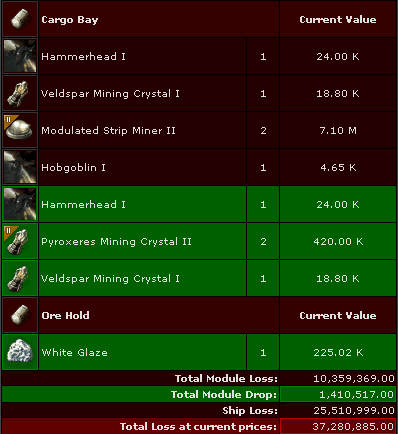 According to the killmail, one unit of White Glaze was sitting inside the Retriever's ore hold. alexhunter was guilty as sin.

When Agent Ryan Gooseling shot down yet another of alexhunter's excuses, alexhunter suddenly realized he wasn't having fun anymore.

alexhunter hit rock bottom. He needed the Code, desperately. Thank goodness for MinerBumping. The Code is only a click away. The New Order would have had much more difficulty spreading the word before the internet.

The miner confessed his shortcomings. That's fine. No highsec miner is perfect--that's what Agents are for. 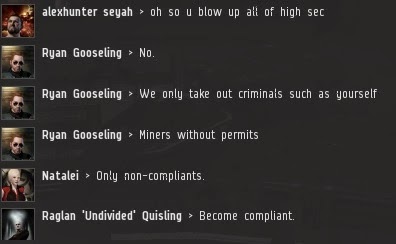 As alexhunter began to read about the New Order on MinerBumping, his eyes began to open. Slowly, but some movement is better than none.

Unlike most miners who claim to be "new players", alexhunter hadn't been playing EVE for several years. Had he been playing for a day or two? A couple weeks, maybe? No, he started playing over two months ago. That's pretty new by carebear standards. They take a long time to master the basics.

Reflexively, alexhunter came up with the idea that it's against the ToS to bump a miner. Like all space lawyers, he was absolutely confident of this, despite the fact that he believed himself to be new and unaware of things. However, our Agents are very experienced in dealing with this kind of nonsense, and they were able to get him to change his mind within seconds.

With nowhere else to go, alexhunter threatened to appeal the matter to higher authorities: His alliance, and me.

By day's end, our Agents were not yet able to convince alexhunter to become a proper EVE player. Still sore about losing his Retriever (and losing the argument), he vowed revenge. Does alexhunter truly have powerful friends, and even "powers" of his own? Only time will tell.