Things are looking up for highsec these days. Thanks to the tireless efforts of the New Order, more and more miners are starting to "get" EVE. As for the rest, we must collect and preserve their tears. Once highsec achieves a compliance rate of 100%, no one will ever need to cry again.

With all the talk these days about the rules against "impersonation" in the ToS, it's important we don't forget about the rest of the ToS. GRAND INQUIZITOR, death threats are not allowed--even if you did lose your precious implants.

Maybe I'm being too sensitive, but when someone tells me to "go back to nullsec", it almost sounds racist. The "die" part is standard.

What's with miners' obsession with death these days? This edition of the Grab Bag is starting off with an unusually dark tone.

By the time I read Shadow Foxden's warning about no players being left, I began to wonder if MinerBumping got a gritty reboot.

Protip: If you want to duel me, please remember the duel provisions listed on the Code. I'm still waiting for one of the Tests to be invoked by Mr. Foxden. Hopefully he gets things sorted out before he quits EVE. 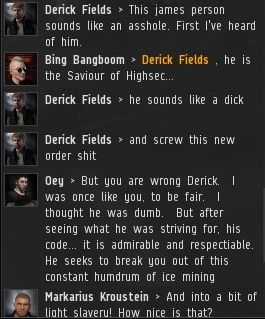 First impressions are important. That's why it's so disappointing to hear negative rumors about me. If you've just heard about the Code and have a problem with it, please keep your mind open. An Agent will be along to help you. 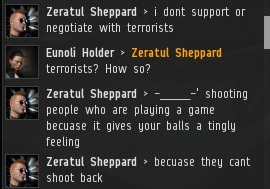 Highsec miner Zeratul Sheppard was outraged by the possibility that there are EVE players who enjoy shooting people in a game. 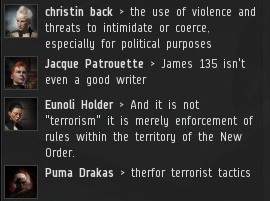 Is the New Order full of terrorists? Unlikely. We're the government. We have about as many terrorists in our ranks as your local fire department. 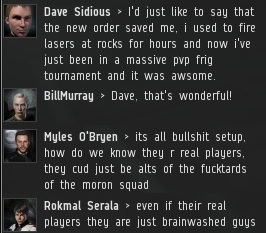 Nathan D O'Mally, your sarcasm is acknowledged... and ignored. If you wish to become an Agent of the New Order, please follow the instructions on this website. Maybe the Order is just the thing to help you straighten out your life.

I don't understand why miners complain that we attack unarmed ships. Whose fault is that? Is it our job to arm the miners' ships?

Tatsu Kishi insists that she never mines AFK. But when her ship exploded, all of her credibility went right out the airlock. It's like I always say: Actions speak louder than words. If you want to prove you're not AFK, you know what to do. I await your 10 million isk.
Posted by MinerBumping at 18:38