The True Test of a Man, Part 4

Previously, on MinerBumping... Highsec miner Ria'ac Aideron said terrible things about the New Order after being ganked a few times. Fortunately, he was persuaded to buy a mining permit anyway. He asked Agent Ophidia Black for help acquiring a reimbursement for his lost ships. Ophidia explained that he must first demonstrate his faith by giving her all of his remaining possessions. 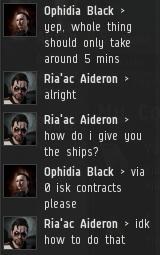 After thinking it over, Ria'ac decided his best option was to go ahead and give Ophidia everything. 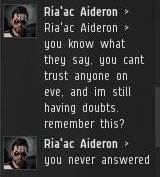 ...But he still harbored doubts. It's not easy going from the Red Pen list to the honour roll. 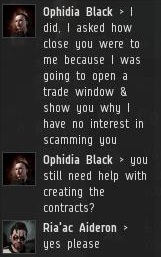 Ophidia reminded him that there was no risk of losing his stuff, because she had no interest in scamming him. Then she offered to assist him in making contracts--just another example of the New Order educating people how to play EVE. 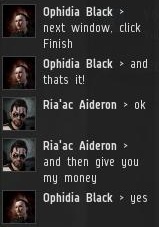 After a crash course in contracts, Ria'ac was good to go. He began transferring all of his assets to Ophidia. 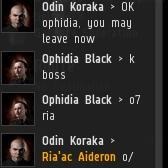 Just then, Ophidia's boss, Odin Koraka, joined the convo. I know, I wasn't aware Ophidia had a boss, either. At any rate, Odin took over and assumed Ophidia's reimbursement duties for the rest of the day. 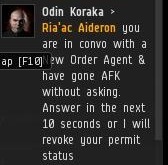 For some reason, Ria'ac Aideron went mute. Odin prompted him to speak, but was met with silence. Would Ria'ac really fall back into his pernicious AFK habits, right at this critical moment? 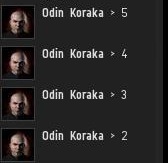 When Ria'ac still wouldn't answer, Odin started a countdown. If Ria'ac was at his keyboard, he would know Odin meant business. He would say something. Did Ria'ac ever care about the Code at all? Was he in it for the money?

If this were an action movie, Ria'ac would dive back in at the last possible moment, and preserve his good standing with the Order. 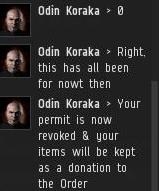 ...But this isn't an action movie. It's real life. 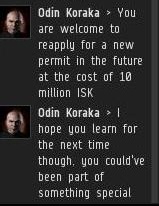 Disgusted, Odin had no choice but to revoke Ria'ac's permit. Now, his sins having separated him from the Order and its Code, Ria'ac had no claim on his former possessions. 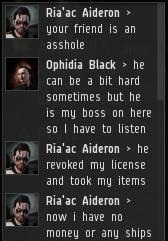 Eventually, Ria'ac finally bothered to return to keyboard. He was furious with Odin. Later, he caught up with Ophidia and explained the situation. Ria'ac was flat broke. Crime doesn't pay. 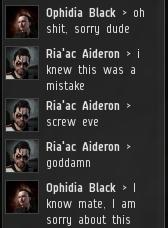 As Ophidia consoled the wayward carebear, Ria'ac cursed EVE. Compounding the tragedy, he showed no remorse for violating the Code. He only cared about his money. He wasn't a true convert to the Order; it had only been matter of time before his true nature manifested itself. 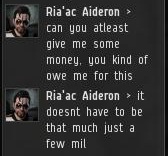 It didn't take long for Ria'ac to shift the blame on Ophidia, the one who had gone out of her way to help him. He asked her for free money. Ria'ac was just as lost as he'd been during his Red Pen days. Could Ophidia salvage the situation, and could Ria'ac's possessions be restored?