Previously, on MinerBumping... After yellowboxing me with a Drake, Dr Robotnik-x attempted to engage me in a debate about the virtues of miner bumping. After losing that debate, Robotnik started stirring up the local miners--who threatened a full-on carebear rebellion. 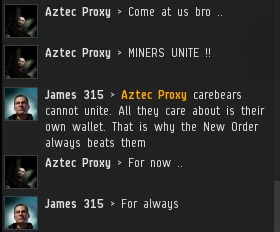 I earned my paycheck as Saviour of Highsec by quickly defusing the situation. I reminded the miners of their helplessness, selfishness, and greed. The revolution was postponed. 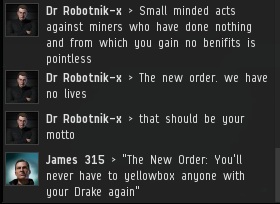 After the hoped-for army of minerdom failed to materialize, Robotnik renewed his anti-Order propaganda. 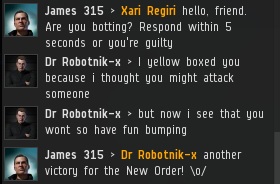 ...Good luck winning a propaganda fight against the New Order. Some gentle mockery resulted in the end of Robotnik's yellowboxing. His Drake retired from the field of battle. 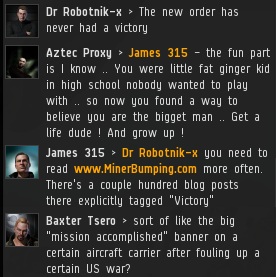 Aztec Proxy lost confidence in his ability to rally the troops, so he resorted to some weird internet meme about redheads. 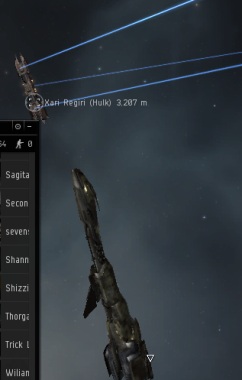 With Robotnik's Drake out of the way, the rebels lost their heavy artillery. I slapped Xari Regiri's Hulk around like a hockey puck. 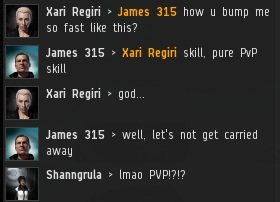 When he awoke, Xari was stunned. He had never seen anything like it. 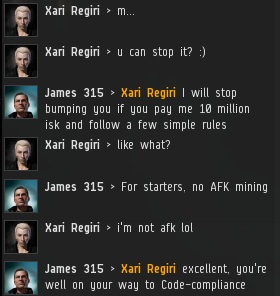 I had Xari's full attention, so I took the opportunity to introduce him to the Code. He had never read the Code before, but expressed an interest. Compliance was within reach. 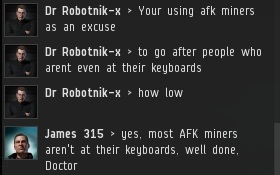 Disgusted by the scene unfolding in local, Robotnik took some time to stick up for AFK miners. In his topsy-turvy worldview, AFK miners should be less subject to attack! 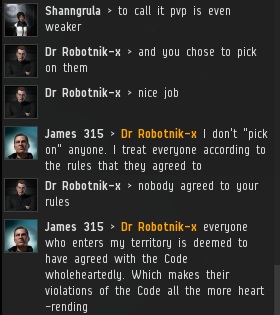 Robotnik and his Drake were docked up. He no longer felt the need to yellowbox me, but he couldn't get back to mining because he didn't want to risk being bumped around. He fumed from inside a station. 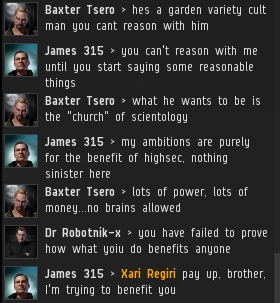 Suspicions ran rampant. The carebears, so consumed by their own greed, couldn't see the generosity of an Agent of the New Order--even as it was bumping them in the face! 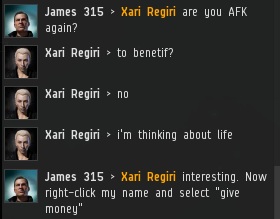 Xari's commitment to non-AFK mining began to flag. Sitting several dozen kilometers out of mining range put him into a contemplative mood. Philosophy is fine, but I reminded him of the overriding importance of the here and now. 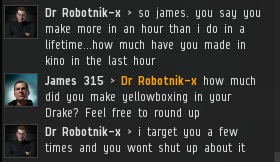 No matter how hard he tried, the stain of Robotnik's yellowboxing efforts couldn't be washed away. It was on his permanent record. Only a payment of 30 million isk would do any good. 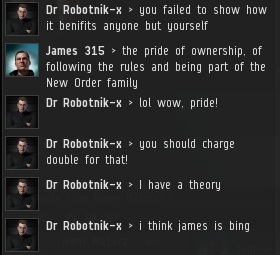 It was then that Robotnik became more dangerous than ever. He was back was against the wall. In a flash, he developed a new conspiracy theory. If proven true, it could break the New Order wide open.