For over a year now, MinerBumping has educated its readers about the reality of the situation in highsec. Now it's time to make things a little interactive. I'll show you the fittings of a dead Hulk, and you tell me whether or not the miner flipped out after being ganked. 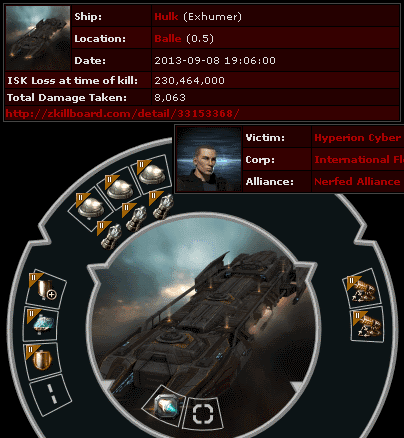 Hyperion Cyber lost his Hulk and 123 million isk pod after Agents Lenda Shinhwa and Selina Dyle provided him with compliance-assurance services. Inspect the fittings. Do you think Hyperion reacted appropriately? 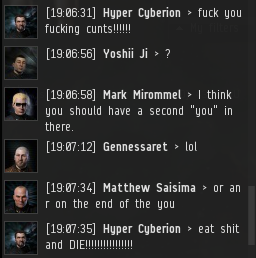 If you guessed "the miner flipped out after being ganked", congrats. Hyperion's alt, Hyper Cyberion, was still in the system, and began pouring out tears on his main's behalf. Before our Agents could say anything, other people in the system started laughing at him. His bid for sympathy failed! 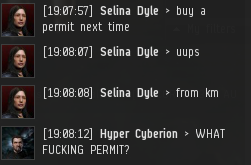 When Selina gave him some good advice about how to improve his security, Hyperion frothed at the mouth instead of thanking her. Apparently Hyperion didn't know what a mining permit is. What asteroid has this guy been living under for the last year? 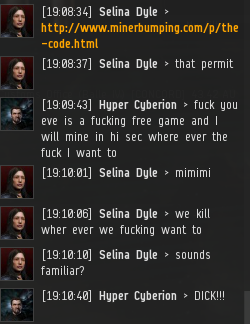 No matter how isolated a carebear may be, he'll almost always express strikingly similar opinions to other carebears. Hyperion felt that his EVE subscription entitled him to mine in highsec with no interference. A trained professional, Selina won the debate within seconds.

Hyperion, I'm here to tell you--and everyone else within reach of my text--that the New Order of Highsec owns all highsec. But we don't want you to stop mining or to "fuck off". We only want you to follow the Code that you were deemed to have agreed to when you entered our territory and voted me in as Saviour of Highsec by proxy. Fair enough? If you remain in highsec you are deemed to have agreed that this is indeed fair enough. Now let's put the pain of the past behind us and work together for a brighter future for highsec.
Posted by MinerBumping at 18:40