Previously, on MinerBumping... An intense debate broke out in the Kino system. Rebel Dr Robotnik-x declared his intention to "protect" the miners from the New Order by using his Drake. 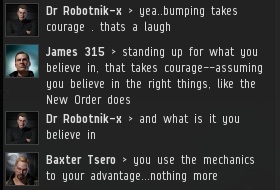 Lacking the firepower to stop the Invincible Stabber from doing its work, Robotnik fanned the flames of discontent with his propaganda. He questioned the honour of the New Order, if you can believe that. 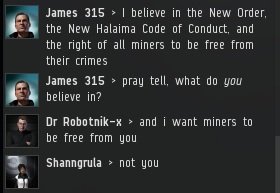 Robotnik and his fellow rebels expressed a negative philosophy. They stood against the New Order, but they didn't stand in favor of anything. 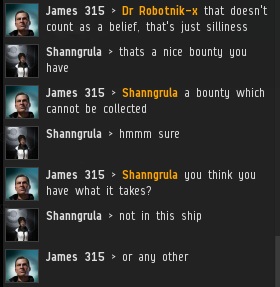 Tempted by the immense bounty that stands uncollected, Shanngrula entertained fantasies of taking a crack at me. Would he give it a try? No, he would not. 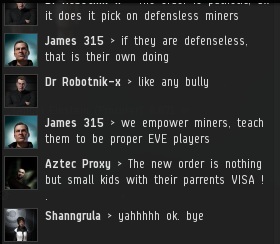 After a few moments, the adrenaline died down and Shanngrula reconsidered what he was saying. He promptly took himself off the chess board. 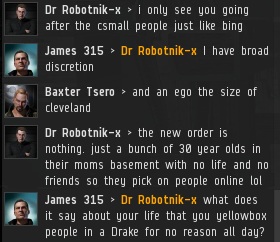 Robotnik couldn't understand why Agents of the Order would do something other than PvE for isk all day. To open his mind, I asked him a few probing questions about his practice of yellowboxing people with his Drake. 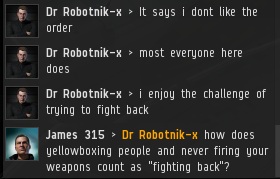 He was convinced that by locking me, he was boldly attacking the New Order. My curiosity intensified. 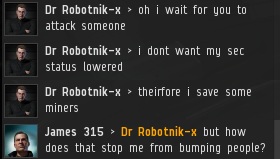 The "carebear stare" is one of the most common ways that rebels try to "fight" bumpers. But since locking a ship doesn't stop it from moving, it tends to be ineffective. 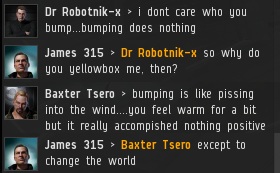 Hopping from one Miner Bingo square to the next, Robotnik changed his mind. He didn't care about the bumping after all. It doesn't do anything to the miners, except stop them from mining. Why would a miner care about that? 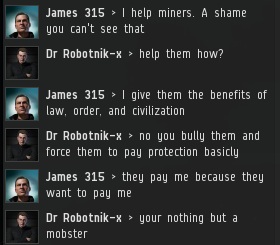 Over the course of our conversation, I came to realize that Robotnik was a baby rebel. He lacked experience, and was exploring these issues for the first time. He groped blindly around the "extortion" square, never quite saying the word. 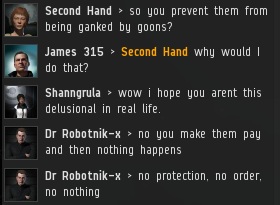 With nothing to believe in, and without the ability to accept the New Order's power, Robotnik drifted into nihilism. I feared he would become an out-and-out denialist before long. 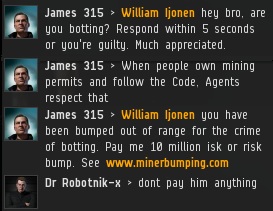 Agents of the New Order, particularly bumpers, have elevated multitasking into an art form. As I educated the Kino system and reasoned with Robotnik, I continued identifying and prosecuting bot-aspirants. 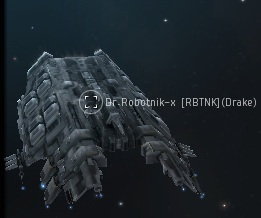 Robotnik still followed me in his Drake, locking me when he got into range. He encouraged William Ijonen not to buy a mining permit, but he was helpless to stop the bumping. 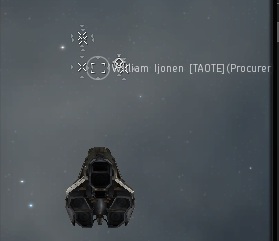 William was on holiday from his keyboard. With Robotnik's Drake struggling to devise an appropriate countermeasure, William's Procurer was at my mercy. He glided into the darkness. 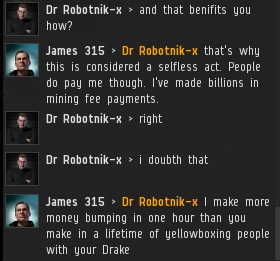 Robotnik was disgusted. I made a casual reference to the hundreds of mining permits I've sold (over 4 billion isk worth, to date, even at my generously low prices). The denialism creeping in, Robotnik refused to believe that anyone has ever bought a mining permit. 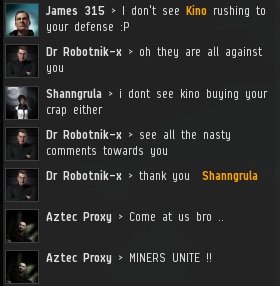 After the rebel forces of Kino lost the Battle of William Ijonen's Procurer, they had no choice but to reassess their strategy of relying on one yellowboxing Drake. To stand any chance against my Invincible Stabber, they would need to join forces and form a united front against the Order. But could they?