The True Test of a Man, Part 5

Previously, on MinerBumping... Rebel carebear Ria'ac Aideron cursed the Code and was condemned to the Red Pen list. Realizing the futility of his rebellion, Ria'ac paid to get himself a proper mining permit. He called upon Agent Ophidia Black to reimburse him for his lost ships and, per protocol, transferred all of his remaining possessions to her custody. When Ophidia's boss, Odin Koraka, joined the convo to complete the transaction, Ria'ac went inexplicably AFK and lost everything. 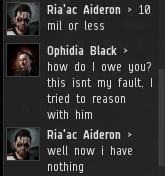 With no ships or assets of any kind, Ria'ac blamed Ophidia and asked her for a loan. 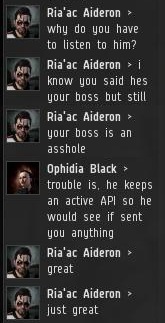 Nothing doing. Odin wouldn't allow Ophidia to give Ria'ac anything until Ria'ac redeemed himself in the eyes of the New Order. 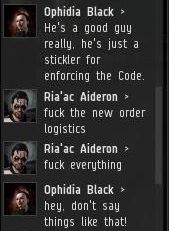 Ria'ac was still in the grips of isk greed. With no material wealth, he saw nothing of worth in EVE. He couldn't even see the value of Ophidia's friendship or the inspiring leadership of the New Order. 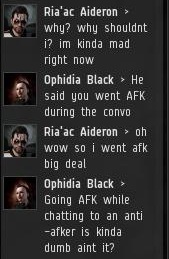 Ria'ac admitted that he had gone AFK without even asking for permission. Ophidia tried to make him see reason, to get him to admit his own fault.

What was done was done. Could Ria'ac turn over a new leaf? Again? 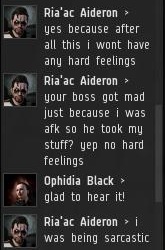 It didn't look good. Ria'ac still blamed everyone but himself. 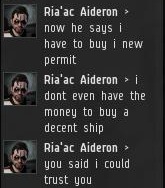 The first step in any kind of recovery is to admit that you have a problem. But that's not enough. One must correctly diagnose what the problem is. Ria'ac couldn't see that he was the problem. 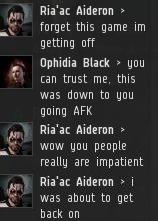 "I was about to get back on" wasn't a very convincing excuse. It's like a serial killer saying, "Sorry, officer, I was just about to stop murdering people, right before you arrested me." 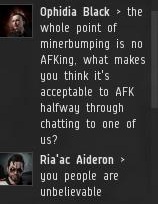 Ophidia Black spoke sense. Anyone could see that. Anyone who wasn't blinded by self-pity and bot-aspirancy, that is. Ria'ac was chock-full of both.

Ria'ac showed his true colors. He never accepted or understood the Code to begin with. He was just playing along: Paying 30 million isk for his Red Pen fine, paying 10 million isk for a mining permit, pledging loyalty to me in his bio, transferring the rest of his assets to Ophidia--it was all part of his camouflage. 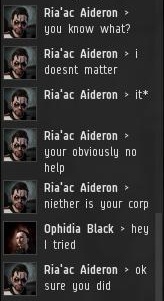 But the Code is a crucible. It tests the hearts of men. No one can fake compliance. In time, every miner's nature is revealed for all the world to see.

Ria'ac dropped a couple F-bombs and flounced out of the convo, never to be heard from again. It was a disappointing to see Ria'ac behave this way, but it was a victory for the Code, which proved itself capable of piercing the carebear's disguise. Ria'ac had paid for a mining permit, and he can do it again. But the next time he gives us his money, he'll need to part with his selfish pride, too.
Posted by MinerBumping at 18:49