I'm all for independence. I think it's great when highsec carebears decide to take up the mantle of personal responsibility. But on the other side of the coin, it can be very dangerous when miners take a "Do-It-Yourself" approach to everything. 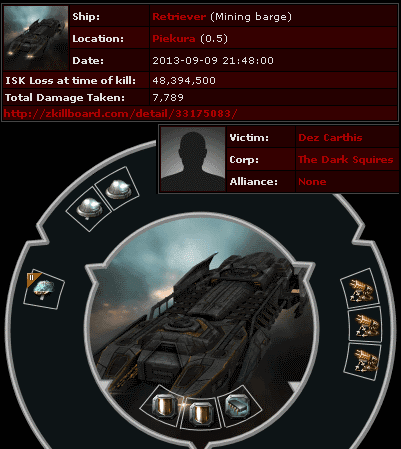 Consider Dez Carthis, a highsec ice miner. Do you think he consulted anyone about his Retriever fit? If so, someone owes him an apology. He thought he would make more money with a max-yield fit, but he used tech I equipment. Obviously this is wrong. All miners should use a max-tank fit. Agent Gaylord Fappington of the highsec Fappingtons had no choice but to kill him.

Almost a half-hour later, Dez returned to his keyboard and was shocked that someone had the courage to take him down for his crimes. He whined and begged for a new Retriever. Then he asked "What is your response?", as if he had backed Gaylord into a corner or something.

The controversy was brought to my attention. I don't know what to make of Dez Carthis calling the New Order a "black bag operation". I mean, yes, I can see how a carebear might look at an Agent of the New Order and think we're super-spies. We could be, if we wanted to. Instead, we operate in the open, for all highsec to see. We'd rather use our talents to benefit humanity. In any case, it's not the color of someone's bag that I'm concerned with--I only care about what's in someone's heart. 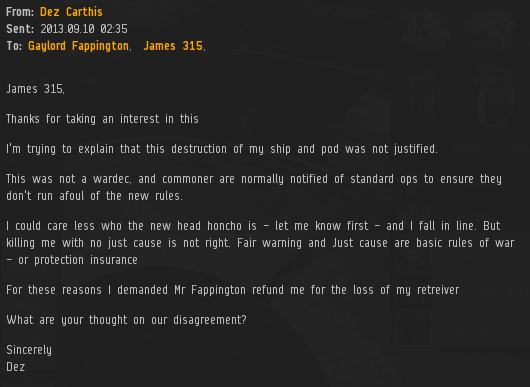 Dez put his own spin on things, carefully eliding the part about his crimes against highsec. He asked me what I thought about the disagreement. Well, on one hand, we have a faithful Agent of the New Order acting with honour and dignity. On the other hand we have a bot-aspirant. Whose side do you think I'm going to take? 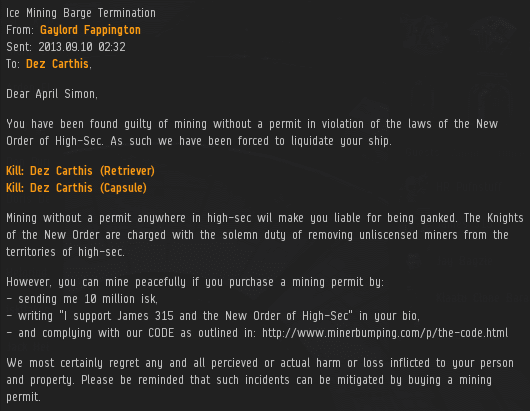 Gaylord didn't feel that Dez was entitled to a replacement Retriever, but he sent him ample information about the Code. Unfortunately, he started the EVEmail with "Dear April Simon", presumably referring to another carebear he'd sent an EVEmail to. 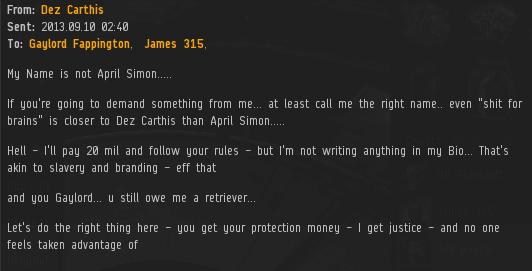 At first, everything looked good. Dez was willing to pay 20 million isk and follow the Code--or so he claimed. Before he could even reach the end of his sentence, he'd already started talking about rules that he wouldn't follow. And he still wanted a free ship.

Thus, we see the fatal error in Dez's approach to the Code. Dez, like so many carebears, wanted a "Do-It-Yourself" Code, built according to his own vision of the world, and accommodating his own selfish desires. Friends, the Code is not a "Choose Your Own Adventure" book. When you enter my territory, you're making a decision to become a supporting character in my adventure, the story of the redemption of highsec. The Code is an all-or-nothing proposition. If you think pledging loyalty to me in your bio is "akin to slavery and branding", then I suggest you get out of the way, while the rest of us build something amazing.
Posted by MinerBumping at 21:52