It's been a heck of a month for Venture pilots. At long last, the results of the Venture-killing contest are revealed! See the official EVE-O thread for a full list of the prizes, rules, etc.

The winner of the special prize for youngest Venture ganker went to Agent Wind of Justice, who scored his Venture kill after playing EVE for only about 6 hours. Who says EVE has a learning cliff? The important things can be picked up so quickly.

As a bonus, Wind of Justice created a YouTube video of the gank, along with some inspirational words. This truly goes to show that you don't need a bunch of money and skillpoints to make a difference in EVE.

The remaining prizes went to those gankers who killed the largest number of individual, unique Venture pilots. In other words, you couldn't win the contest by ganking the same Venture over and over. Each contest participant had to go the extra mile to hunt as many different characters as possible. They spread the love. Participants had to submit their results to the contest coordinators to be considered.

The third runner-up is Agent Super Perforator, with a respectable 21 Venture kills.

The first runner-up is Lucrezzia, who really knocked it out of the park with 176 Venture kills.

Agent Just Got OutOfJail, who managed to score--gasp! is this number correct?--a total of 365 Venture kills. 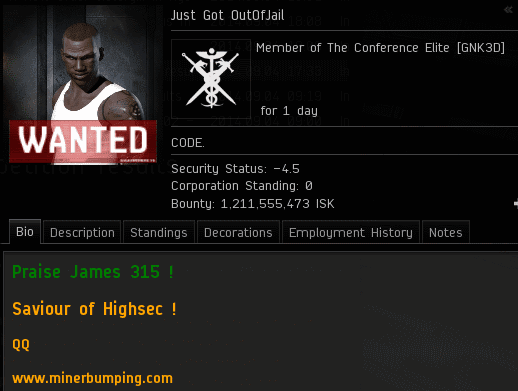 A well-earned first prize of 5 PLEX and 3.5 billion isk was awarded to Just Got OutOfJail for this uncommonly elite PvP achievement.

Three hundred and sixty-five Ventures! That's so many different people touched in a positive way, all by one Agent in one month. We can only hope that all these Venture pilots learned something about the way EVE is meant to be played.