A Brilliant Swell of Tears, Part 1

Want to play EVE at its most extreme? Live life to the fullest? Become an Agent of the New Order. In our line of work, every second counts, and the stakes are as big as you can imagine. For example: 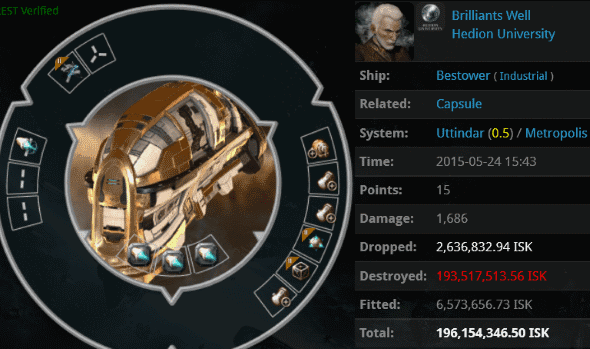 Whew! It was a close-run thing, but Agent Tisiphone Dira managed to destroy the Bestower illegally piloted by Brilliants Well, an undocumented carebear. The fail-fit industrial was loaded with nearly 200 million isk of Nocxium. 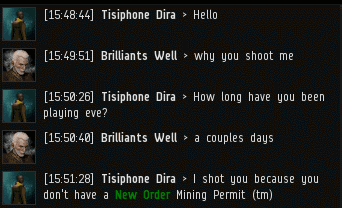 Despite his expensive cargo, Brilliants claimed to be a new player who had no idea about the existence of the Code. I keep saying CCP should put it in the tutorial, but as of yet they haven't--so much for the new player experience. As a result, it's up to our Agents to do the tutoring. Tisiphone explained that all cargo transported by unlicensed pilots is considered contraband. 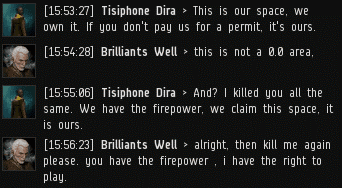 Allegedly only "a couple days" into the game, Brilliants had already swallowed whole the myth that in-game sovereignty dictates everything. He didn't know about CodeSov. 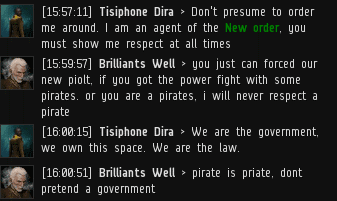 The carebear refused to accept the authority of the New Order. He accused Tisiphone of being a pirate and demanded that she stop pretending to be part of a government. Brilliants couldn't stand to see MMORPG players pretending to be something they're not. 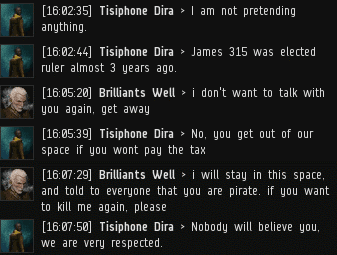 When Tisiphone refused to back down, Brilliants terminated their private convo. Now the matter would be decided in the court of public opinion: Uttindar local.

The alleged gank victim presented his case to Uttindar. EVE players can be a skeptical bunch, though. They aren't inclined to believe someone simply because they say they're a victim.

In fact, some in Uttindar felt the hauler pilot was probably to blame for the gank. Brilliants was caught off guard.

Tisiphone's reputation had been built up over the course of a long career of Code enforcement. One accusation wouldn't be enough to bring it down.

Frustrated by the lack of public outcry, Brilliants repeatedly challenged our Agent to a duel. He demanded satisfaction. Tisiphone ganked Brilliants' rookie ship. Still the carebear was not satisfied.

Brilliants' profanity-laden challenge didn't go over well with the people of Uttindar. He just didn't get modern highsec culture. 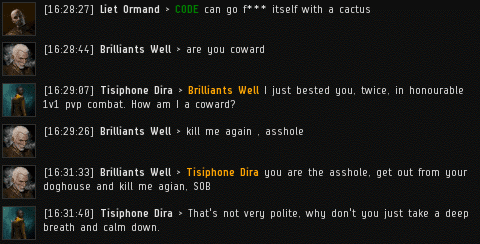 Tisiphone chilled out in a station while her GCC timer ran down. Her relaxed, confident demeanor was set in sharp contrast to the teary fulminations of Brilliants Well.

About 50 minutes after the original gank, Brilliants' psyche suffered a total collapse. He engaged in the carebear's last resort: Spamming local.

Public opinion turned totally against the spammer. Did Brilliants have any hope of getting justice for his Bestower?

To be continued...
Posted by MinerBumping at 01:12