Highsec: A PvP zone in a PvP server for a PvP game. 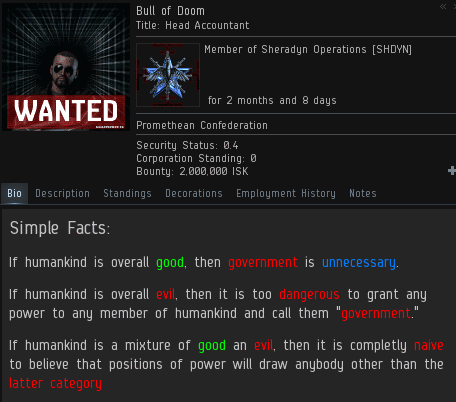 Bull of Doom didn't know it, but he was about to engage in a thrilling round of PvP. Bull was a highsec miner. Judging by the sentiments expressed in his bio, he was not fully prepared for life in modern highsec, which is all about good government. 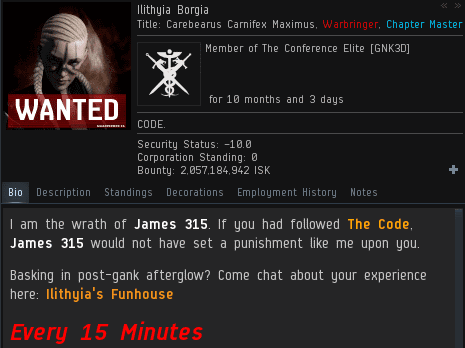 Bull's opponent was Agent Ilithyia Borgia, an accomplished and elite PvP'er. Who won? If you guessed that the CODE always wins, you are correct. Ilithyia's succeed-fit Catalyst defeated Bull's fail-fit Retriever easily.

Our Agent was a champion, and she reasonably assumed that the miner might like to meet her. Rather than invite the miner to a convo, however, Ilithyia allowed Bridget Bishop to make the introduction. This impressed our Agent's importance upon the carebear. 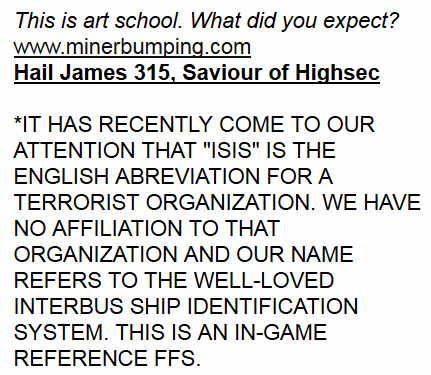 Literally ISIS was not literally ISIS, however. You can still read the corp description, which is available on EveWho.

Extended periods of highsec mining are as bad for one's mental health as they are for one's spirit. Our Agents are often tasked with the job of getting miners back to their senses once they have been removed from an asteroid belt.

Bull was even less grounded than most carebears.

Focus is important. A carebear's thoughts tend to go in every direction but the right one. They may reject the Code, but they need its guidance more than anyone else in highsec.

Misinformation filled the young miner's head. He obviously hadn't been reading MinerBumping. Of all the carebears whose ships are destroyed, how many own permits?


Bull of Doom > you may not gank terrorist sympathisers (sorry, "permit holders") but others in CODE will
Bull of Doom > which is why this is a scam
Bull of Doom > and you are literally hitler
Ilithyia Borgia > You need a reality check miner
Bull of Doom > You are the one who needs to face reality

When a miner reaches for a definition of "terrorism" or "extortion", it's safe to say he's lost the argument. Highsec miners lose arguments almost as often as they lose ships.

According to a Miner Bingo square, "Without miners, you'd have no ships!" Miners claim to be altruistic. But they never stop thinking about money--and RMT.

A new possibility emerges from the sandbox: What if EVE players merely "roleplayed" as RMT'ers? That excuse probably wouldn't go very far. SOMER Blink only got away with it for a couple years.

Of course, plenty of misguided individuals claim to be the legitimate government of a particular territory. We don't need to worry about that in highsec. The New Order's legitimacy has been established beyond any reasonable doubt or criticism. The Code reflects the will of the people. Key word: People. The daffy bot-aspirants complain about this even as they aspire to become something that cannot vote!
Posted by MinerBumping at 17:45