You know what that screeching sound means... Time for another edition of the Highsec Miner Grab Bag! 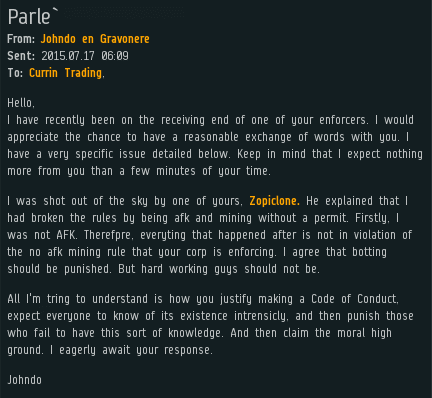 That should get you started. Basically, it's the will of the people.

We don't hide behind websites; it's simply easier to supply links than to repeat volumes of information to each citizen. 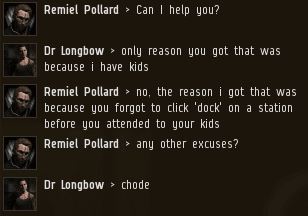 Another carebear figuratively throws his children under the bus. But Agent Remiel Pollard won't let him get away with it. I suspect Dr Longbow was acting like a bot-aspirant long before he had any kids.

Speaking of excuses, Richie Schmitt claims he was in the bathroom (but wasn't AFK). A new wrinkle: Richie sent the EVEmail more than a week after he was ganked. Pop quiz, readers! How can this be explained?

(A) Richie remembered exactly where he was when ganked 9 days earlier.
(B) Richie was in the bathroom for 9 days before discovering he was ganked.
(C) Richie took 9 days to come up with his excuse. 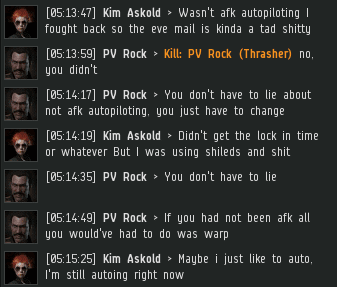 Kim Askold impressively darts from one excuse to another in an attempt to make herself feel better about being ganked. "Using shields and shit" indeed. Does that really count as fighting back? If so, do the carebears need to stop complaining that we shoot ships that can't fight back, as long as the miners "use" shields? 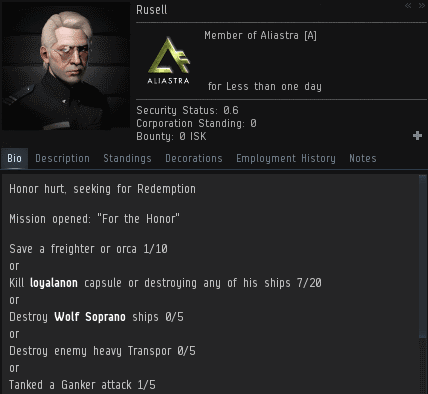 Rusell is an anti-Order rebel. We've dealt with him before. His honour was "hurt", so he's developed a new way to use his bio. 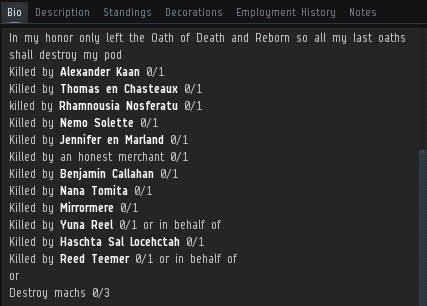 As we continue reading Rusell's new bio, the game mechanics of his honour mission become less and less clear...

...But we wish him luck anyway.

I think I speak for all Agents when I say that we'd never put a paw over a carebear's ear. Such cynicism!

Jimmy CC wasn't at all salty about losing his 519 million isk anti-tanked industrial ship. According to Jimmy, the loss was less than 1% of his wealth. If so, then despite being less than a year into the game, Jimmy has well over 51.9 billion isk to his name. Agent PV Rock sent a reply, asking Jimmy to confirm that this was indeed the case. 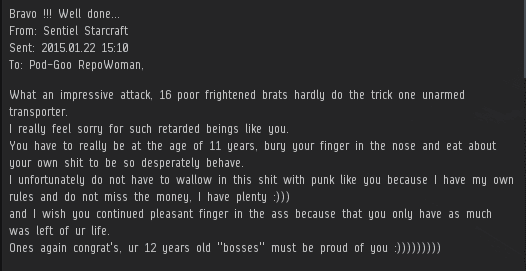 Sentiel Starcraft was another carebear who had plenty of money and claimed to be perfectly content with the loss of his ship. Highsec is filled with angry, happy, furious, calm people.

In the end, only the Code can bring true contentment and satisfaction to the highsec dweller.
Posted by MinerBumping at 19:02