A Brilliant Swell of Tears, Part 3

Previously, on MinerBumping... Scandal! Brilliants Well was caught hauling ore through highsec without a permit. When life hands you a lemon, make lemonade. Agent Tisiphone Dira made lemonade out of Brilliants Well's Bestower, destroying 200 million isk of contraband in the process. Reasonable observers agreed that this proved the system works. But Brilliants was unreasonable, and he soon clamored for justice in Uttindar local.

When ganked, carebears tend to draw real-life subjects (and threats) into the picture. Brilliants boldly declared that people behave in real life the same way they do in EVE. If so, Uttindar local was about to gain a greater appreciation of what the people in Brilliants' life have to deal with on a daily basis.

Tisiphone comported herself with dignity and honour. Brilliants did the other thing. Running out of options, he gambled that his appeal for racial tolerance would somehow result in getting his ship and cargo reimbursed.

Brilliants' plan went awry. Uttindar local was not as receptive as he'd assumed. Now he had no way of applying social pressure on our Agent. 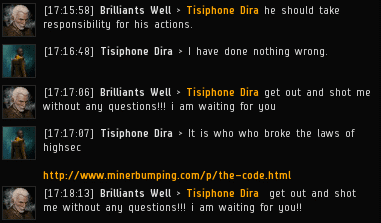 It was clear to all that Brilliants' Uttindar campaign was a failure. Tisiphone reminded Brilliants of another path, the one set forth in the Code. The carebear refused to consider it. He threatened to return to spamming. 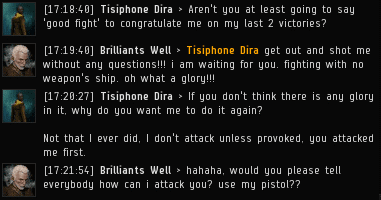 Fearing a repeat of the spam tactic, Tisiphone quickly tried to reason with the carebear from every possible angle. However, Brilliants was too confused and upset to meaningfully participate in the dialog. 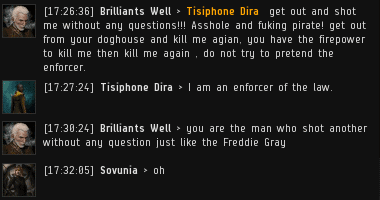 Uttindar now had the worst local chat in highsec. 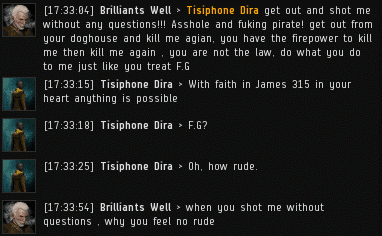 The carebear's vendetta against Tisiphone consumed him completely. He no longer made any plans for hauling ore. There was no room for courier contracts in his life. Now there was only revenge.

Tisiphone is a busy Agent, and she needed to spread her love to some other systems for a while. She promised to be back in a minute, but important matters kept her preoccupied for about 15 minutes. This was plenty of time for Brilliants to cool off. 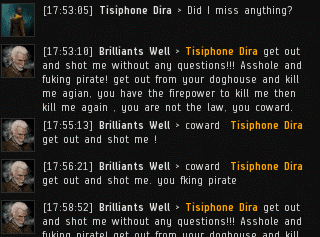 No such luck. In fact, Brilliants had been subjecting Uttindar local to his nonsense the entire time.

An angry carebear is an unproductive carebear. How can they obey the Code and help build highsec's glorious future when they're busy ranting and raving? That's why it's so important for them to calm down. 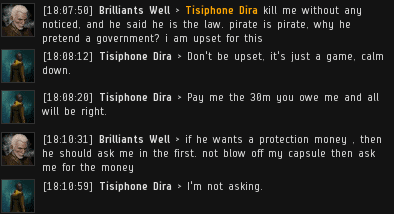 Our Agent was polite, but firm. She needed 30 million isk to cover Brilliants' Red Pen fee. The payment was not optional. 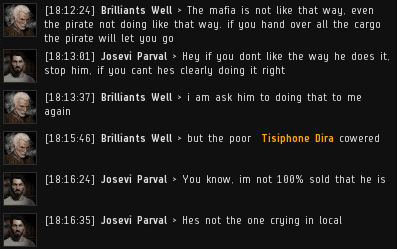 I've often said that the rebel carebears are the New Order's best recruitment tool. Every single player who passed through Uttindar became a little more likely to support our cause.

Time passed. Then more time passed. But the carebear's anger would not subside.

At this point, you might be wondering how long this went on. You could go back to Part 1 and look for the timestamp on the Bestower killmail, but I'll save you the trouble: The gank took place at 15:43 EVEtime.

I cannot say how long Uttindar was treated to Brilliants Well and his tears. Agent Tisiphone was simply unable to remain in attendance for the whole meltdown. Brilliants seems like a hopeless case, doesn't he? Yet I am 100% convinced that even this carebear can be brought into compliance with the Code. After all, he spent hour after hour in Uttindar persuading people of the wisdom of the New Order.
Posted by MinerBumping at 17:43