A Brilliant Swell of Tears, Part 2

Previously, on MinerBumping... Agent Tisiphone Dira was on duty in the Uttindar system when she spotted a Bestower illegally piloted by Brilliants Well. In a perfectly executed gank, she destroyed the Bestower and removed 200 million isk of Nocxium from Brilliants' possession. In hindsight, Tisiphone made the right call. She made the only call. But Brilliants took his case to Uttindar local, hoping to incite an uprising against Tisiphone.

Brilliants failed to get the public on his side. In despair, he began spamming local. 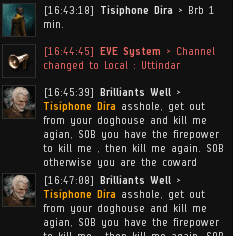 It soon became clear that the carebear was barking mad. 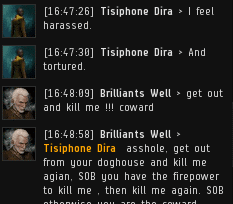 Uttindar local was subsumed by the relentless propaganda barrage. Tisiphone couldn't even carry on a pleasant conversation about the Code anymore. 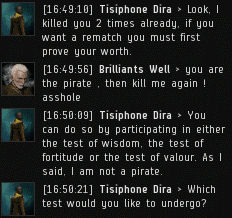 Now Tisiphone's only hope was to find some way of breaking Brilliants free of his chat spam routine. 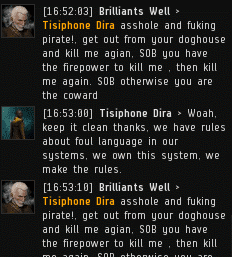 However, our Agent only succeeded in making Brilliants slightly modify the chat spam before it continued. 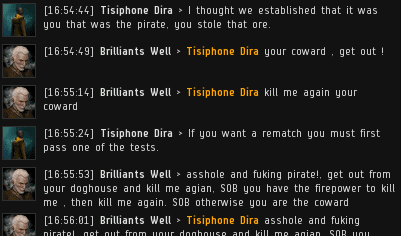 On occasion, Brilliants would interrupt his spamming to answer a charge directly. But then the spam routine reasserted itself. Brilliants was more bot than bot-aspirant, now.

Then something curious happened. In spite of everything, a random passerby in local actually voiced support for Brilliants.

Finally sensing a sympathetic (if misguided) ear, Brilliants stopped spamming and began to present his side of the story.

Brilliants Well's guilt was beyond question. So he focused on procedural issues. Without citing any provision of the Code, Brilliants claimed he was entitled to be asked about his Nocxium shipment before being ganked.

The carebear stunned Uttindar local with his new line of argument. 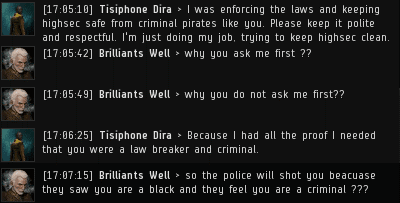 What began as a debate about the Code and Tisiphone's reputation was about to take a strange and unexpected turn.