Some players have names that make you wonder about their intentions for EVE when they originally signed up for the game. Take NightStalkerTheSecond Hellbringers, for example. How did he imagine his EVE career going? He probably didn't think it would turn out this way: 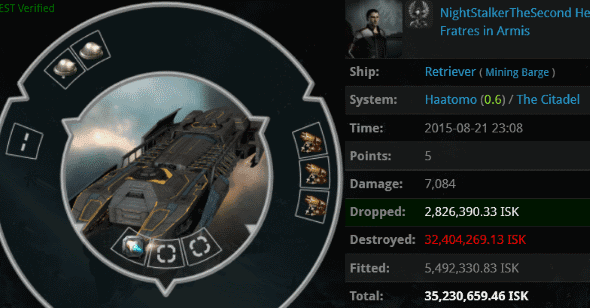 Ganked while flying a fail-fit Retriever in highsec. Yet so many carebears end up exactly where NightStalkerTheSecond did. Agent Bellatrix Invicta, who was responsible for killing the miner, sent him an informative EVEmail and was promptly invited to join a convo.

The first curveball: The miner immediately brought in someone to assist him. He had no intention of allowing the Agent to steamroll him in conversation. I'm surprised more miners don't do this, except that most miners are loners (even--or perhaps especially--if they belong to a large highsec corp).

NightStalkerTheSecond and Eskobar were members of Fratres in Armis. In fact, they were the only two members. Supposedly they had each other's backs, but I didn't see Eskobar telling his buddy not to live the life of a highsec miner.

Our Agent began with a polite version of "RTFM".

It's amazing how many carebears claim to be in total compliance with the Code, and yet they lack mining permits. Is there some other New Halaima Code of Conduct that I should be aware of?


Eskobar Troyun > can you show us where to get the permits?
Bellatrix Invicta > From me!
Bellatrix Invicta > 10m a piece for 365 days of safe mining!
Eskobar Troyun > you just show up, kill him. then say he violated a rule never advertised
NightStalkerTheSecond Hellbringers > with all do respect ma'am im packing up and mining somewhere else im not buying your damn permit

...And straight into the denial phase. Carebears lose their curiosity about the rules once they're told they need to part with some of their beloved isk, no matter how little. The permit is a great litmus test for bot-aspirancy.

The brothers-in-arms claimed total ignorance of the Code. Admittedly, CCP ought to include something about us in the tutorial, or possibly the launch screen. If CCP won't teach the miners, we will. It's often said that if you tell someone to look up the information for themselves, they'll remember it better. Similarly, according to New Order science, the best way to teach a carebear is to kill them.

Ah! Behold the newbies, so quick to pick up the latest in carebear excuses. At this point, most EVE players have only the dimmest understanding of sov mechanics. But Eskobar was all ready to go with the "you can't claim sov in highsec" nonsense.

The miner's brother-in-arms dismissed the Code entirely. That's no way to get a reimbursement.

Again, Eskobar clearly hadn't read the Code, which explicitly and emphatically places miners at the bottom of the EVE hierarchy.

Once again, the newbies were up-to-date on all the carebear clichés. If only they could be so well-versed in the Code, and ignorant of carebear talking points--instead of the other way around.

Another red flag appeared when Eskobar referred to himself and his fellow newbie as "level 1"s.

For the record, Haatomo is a 0.6 security system. Eskobar was absolutely convinced that all highsec was newbie space. (Another tutorial fail.)

The ignorance of the newbie brothers was astonishing. Could they be taught to obey the Code, or would they only continue to rage at its truths?