The Stages of Grief, Gamis Edition

Indeed! Led by Agent Kalorned, New Order forces scored a dazzling series of victories in the Gamis area over the last few months. Highsec is closer than ever to experiencing absolute domination. It has become abundantly clear that one day every man, woman and child in highsec will be consumed by the Code, in thought and deed. What will that look like? Let's view highlights from the @NewOrderGamis Twitter feed to find out. 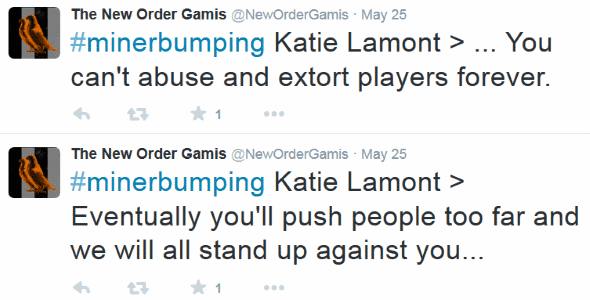 The first reaction to the presence of a New Order Agent in local is resistance. But "resistance" is a generous term. It usually comes in the form of "someone else should do something".

When the "someone else" fails to materialize, resistance breaks down quickly.

But what if the "someone else" does stand up and present himself? In almost every instance, the self-appointed rebel leader spouts a few threats in local and then goes AFK.

Sometimes they promise to return, but don't hold your breath while you wait!

After it becomes apparent that the New Order cannot be defeated through the use of in-game means, the appeals to CCP begin in earnest.

A cottage industry of space lawyers pops up. Carebears can't believe that CCP would allow the New Order to take over highsec, where the vast majority of EVE players reside.

But the petitions fail to produce a result. That's when the carebear psyche can take a dark turn.

Harok Bunkers fantasized about Kalorned getting shot. But do carebears hope Kalorned gets "shot" in-game?

Okay, they want our Agent to be shot by a "gun", but do they mean an in-game gun?

Our Agents prevail against the in-game "resistance", the petitions, and the real-life threats. After that, the carebears can only offer excuses for being AFK. (Or maybe the miners vomit at their keyboards.)

When all hope is gone, the tears become purified. The carebears express pure hatred and outrage, distilled of threats and promises of revenge. 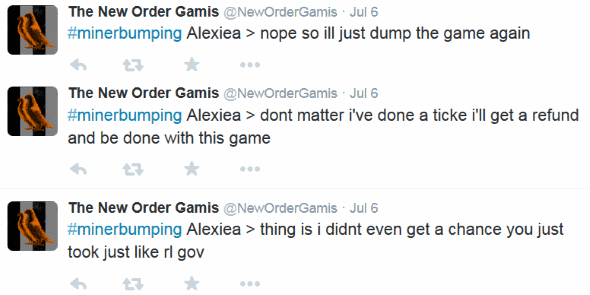 The final stage of a carebear's grief is acceptance. They finally learn to embrace the Code, or they quit the game.

Unfortunately I didn't find a good tweet of a carebear embracing the Code, so here's another quitter. Until next time!
Posted by MinerBumping at 17:44