The New Order Is Everything in History

dryden01 claimed total ignorance of the Code. With breathtaking succinctness, Tisiphone caught him up on the last three years of EVE.

He didn't take the news well. He voted for the other guy, I guess. 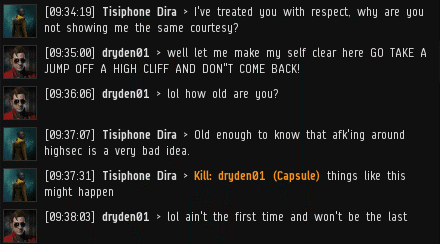 The stubborn carebear dug in his heels. He vowed to continue losing implants while AFK.

Sensing that he was losing the argument, dryden01 shifted gears. He insisted the only reason he wasn't calm is that he was in a big hurry, having suffered a stroke IRL.

Now all the carebear's personal problems, accumulated over the course of a lifetime, were laid at Tisiphone Dira's feet. That's what happens when you pod someone in highsec.

Note the carebear's weasel words here: If he had been warned, he "may have moved on". Sort of like the guy who says, "I was going to buy a permit, but then you killed me, so now I never will." At any rate, dryden01 jumped from Al Capone forward to ISIS. dryden01 called them by their preferred abbreviation, IS. If only he had shown such deference to the New Order and its Agents. 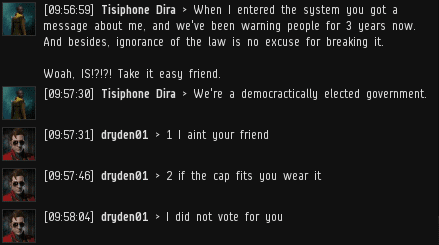 The carebear continued to drift toward the rebel camp. His loyalty to the New Order was in serious doubt.

From the deserts of Iraq and Syria, dryden01 now leaped back to the mobsters of old, with their Tommy guns and proxy votes.

Scarcely had the carebear taken a swig of prohibition-era moonshine when he hit fast forward again!

But dryden01 abandoned "Hitler style" before too long. He took a quick detour through space, if not time.

Then the carebear changed his mind once again, returning to the Axis powers.

Tisiphone could barely keep up with all the excuses and historical allusions. The fact was that dryden01 had violated the Code and paid the price. Such is the fate of all who oppose us. Every highsec rebel will be brought to justice, no matter where--or when--they choose to hide.
Posted by MinerBumping at 18:24