All roads lead to the New Order. 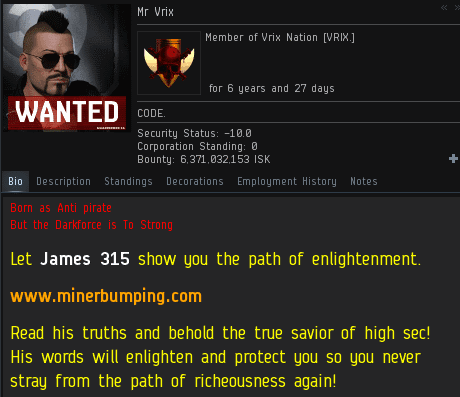 Mr Vrix and the ST0NER SMURF gang from Vrix Nation originally imagined themselves as an anti-pirate force. But as they spent more time in highsec, they came to realize that the people carebears call "pirates" are actually the good guys. The members of Vrix Nation decided that the best way to serve highsec was to have their entire corporation join the CODE. alliance. You can read about their adventures on the ST0NER SMURF blog.

Vrix Nation's specialty is regulating the use of the "autopilot" feature.

As required under the terms of the Code, everyone who wants to make use of the autopilot feature needs to acquire a New Order permit. If they don't, they run the risk of being suicide ganked.

Vrix Nation is especially concerned about the number of EVE players who autopilot in their pods. Why would someone do this, unless they assumed they were completely invulnerable in highsec? It's the essence of bot-aspirancy. 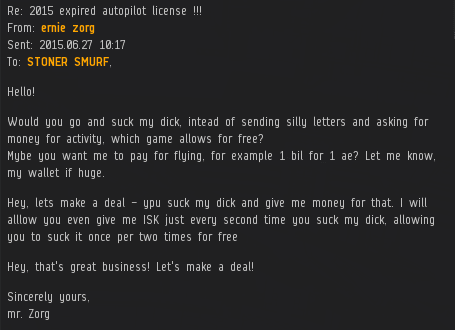 However, not everyone is happy about the New Order's rules on autopiloting. Carebears actually send EVEmails to our Agents telling them that they won't comply. It's incredible. It may be hard to believe, but there are plenty of Gabriel Jared Sheppards out there. Only the New Order stands in their way. 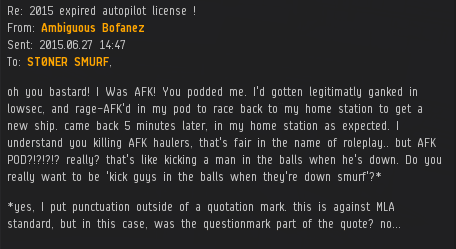 Others say that they're not carebears, but don't think it's "legitimate" to suicide gank pods. That's not their call, though. They don't own highsec.

AFK autopiloters have a lot in common with AFK miners. One can picture Leo Okel feeling quite at home in an anti-tanked Hulk. 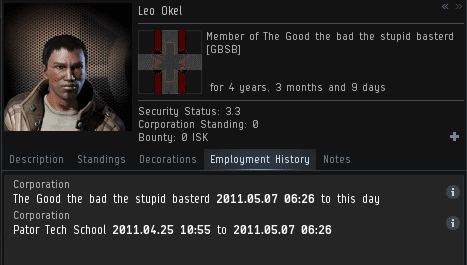 What you might not guess is that Leo had a secret--a powerful secret. He was about to become Vrix Nation's arch-nemesis.

No longer constrained by the limits of his empty Capsule, Leo Okel revealed his true form: He claimed to be a CCP administrator!

After tens of thousands of ganks, it finally happened. The New Order messed with the wrong guy. If our Agents didn't pay him 100 million isk, they risked a permaban.

As time went on, the exact nature of Leo's threat became a bit muddled. 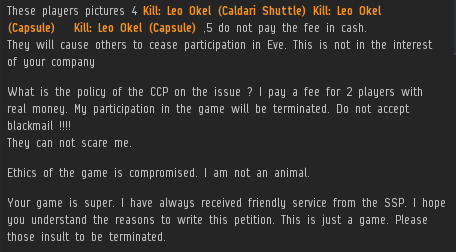 When all was said and done, Leo's privileged status as an administrator for CCP turned out to be the ability to file a petition with CCP. Quite a downgrade, really. One wonders what the GM thought of the petition. Leo said that if our Agent wasn't permabanned, he would cancel two whole accounts. In the very next sentence, he urged the GM not to accept blackmail. As of the date of this post, no one in Vrix Nation has been permabanned. I guess blackmail doesn't get you very far. My advice? Try the Code instead. Then you'll go places.
Posted by MinerBumping at 18:11