Highsec reached a major milestone today. As I was about to begin preparing the latest edition of the Grab Bag, I discovered something marvelous: There were no new carebear tears to report! After three years, it seems the PvE population has finally grown up a bit. Well done.

Of course I was only joking. You knew better than that, dear reader. 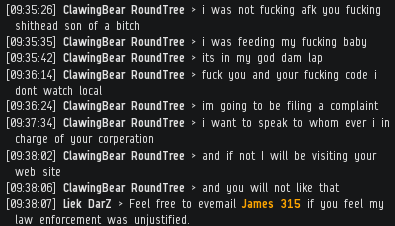 Let's begin today's Grab Bag by tying up a few loose ends. Here, we see the prequel to ClawingBear RoundTree's EVEmail to me in a previous MinerBumping post, I Wasn't AFK, I Was Just...

And in response to a request I made for a Russian translator in the last Grab Bag: 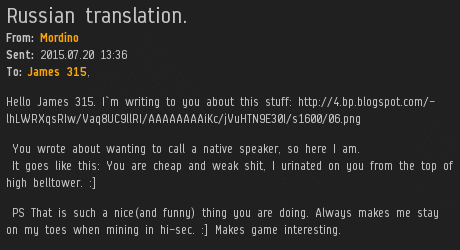 The mysterious "bell tower" remark is thus clarified. Now we can move on.

Arclite Vakarian is the latest to complain that the New Order of Highsec governs highsec instead of nullsec.

The truth is, someone needs to clean up highsec, and it might as well be the organization dedicated to cleaning up highsec. I always felt this made sense, but apparently some EVE players find it unintuitive. 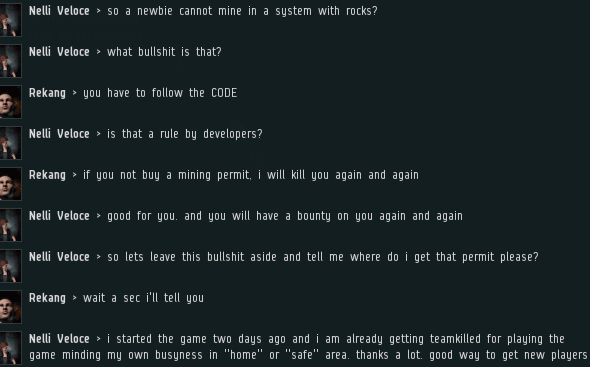 This is a great story. Nelli Veloce, a new player, had her Venture ganked by Agent Rekang. But Rekang was even newer than Nelli--having played EVE for less than 24 hours before scoring his first kill. Even better, Nelli ended up purchasing a mining permit. You don't need to have tens of millions of skillpoints and a bunch of allies or expensive ships to make your mark in EVE. All you need is the Code. 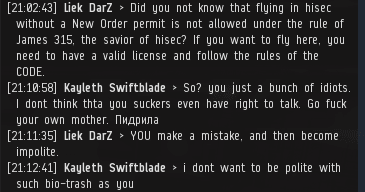 At the risk of mixing metaphors, Kayleth Swiftblade wasn't the swiftest knife in the drawer. 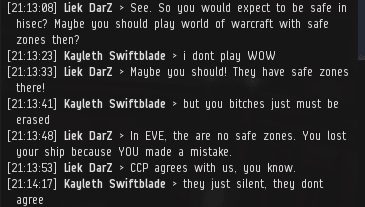 Kayleth bought into the theory--popular among some carebears--that CCP isn't sure whether or not ganking should be allowed in highsec. They have spent the last decade or so trying to make up their minds. 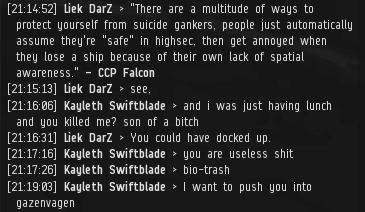 When confronted with evidence of CCP's intent, such carebears lose their temper and try to push us into gazenvagen. 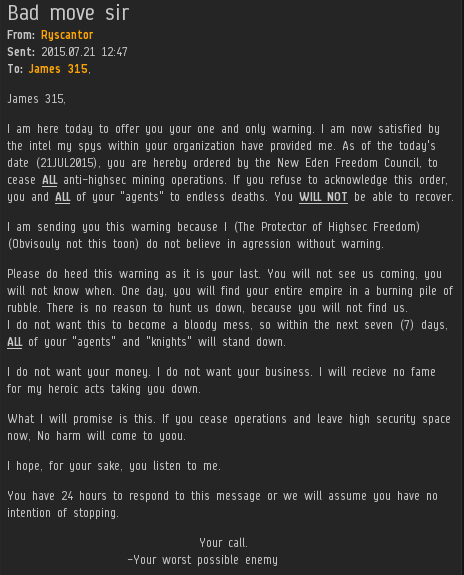 Why does the CODE always win (always)? Because people like Ryscantor are my "worst possible enemy". Ryscantor was right about one thing, though: He won't receive any fame for his heroic acts taking me down.

These guys have a long way to go before they become Ryscantor-level threats.

There are a lot of things you could say about this EVEmail. So many things. But I can't get past the fact that the miner's name is the breakster. Is that wrong?

It's becoming ridiculous how many carebears and their loved ones are supposedly getting injured or otherwise physically incapacitated IRL at the very moment our Agents gank them. Maybe highsec really is more dangerous than null.
Posted by MinerBumping at 18:40