A Snowball's Chance in Highsec, Part 1

There are so many ways to advance the cause of the New Order and its Code. An Agent is someone who does something--anything--to help spread and enforce the Code. We know that highsec will eventually be brought into 100% compliance with the Code, and that it will stay that way forever. Therefore, any contribution, no matter how big or small, is meaningful. 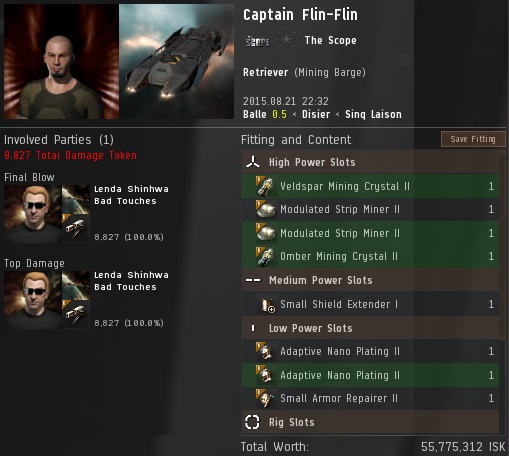 Agent Lenda Shinhwa kills a lot of Code violators, such as Captain Flin-Flin with his unlicensed Retriever. Lenda also podded the miner right out of the system. Ganking in this manner is a traditional, accepted method of enforcing the Code. 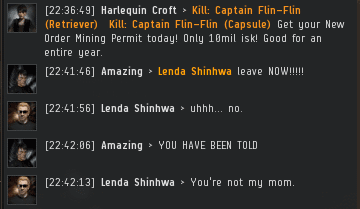 But other kinds of Agents are often overlooked. Consider Agent Harlequin Croft. She didn't gank Flin-Flin's Retriever. Instead, she acted as Lenda Shinhwa's herald in local. She championed the cause and brought another Agent's accomplishments to everyone's attention. 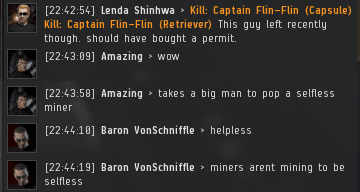 Serving as the herald of another Agent is a modest, dignified profession. It's easy to scoff at a herald. But those who would mock one such as Harlequin Croft should be warned--an Agent is still an Agent. 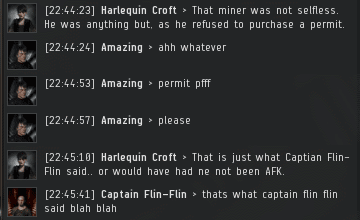 Without warning, Captain Flin-Flin returned to the system to find everyone talking about him. He wasn't too happy about it. 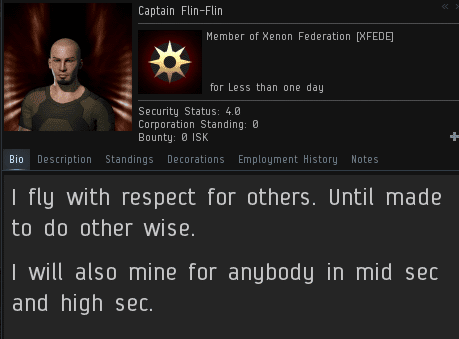 Even though he'd just been punished for violating the Code, Flin-Flin didn't see himself as the bad guy. He was dedicated to mining in highsec, without a permit. Now he wanted revenge. Unfortunately, he was too afraid of Lenda Shinhwa's power. He couldn't go after the Agent who had killed him. What to do?

To Harlequin's surprise, Flin-Flin suddenly expressed an interest in buying a permit.

Yet the miner was behaving in a very suspicious manner. He wanted to meet Lenda's herald at the station. Conversing in local wasn't enough. For some reason, he needed to see her face-to-face.

Harlequin began to suspect that the miner was up to no good. Perhaps Flin-Flin decided that if he couldn't kill the ganker, he would kill the herald.

Harlequin Croft is an Agent of the New Order of Highsec. For that reason, she was fearless when put to the test. When she saw Flin-Flin waiting at the station in a heavily-armed Vexor Navy Issue, she was not intimidated in the slightest. 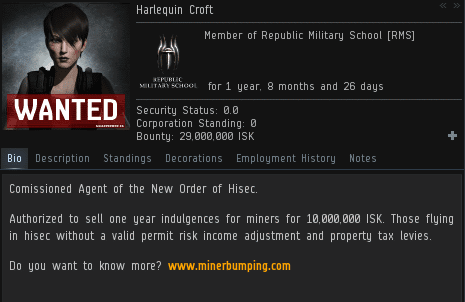 But the truth was, Harlequin wasn't a combat expert. She had never won a PvP battle in her entire EVE career. And she didn't have a bunch of fancy ships and weapons. All she had was a Probe-class frigate.

Harlequin prepared for battle. She considered the weapons at her disposal. She only had three of them: One was the Civilian Gatling Autocannon she'd taken off a rookie ship. The second was a Festival Launcher loaded with a few dozen snowballs. And the third weapon?

...An absolute faith that the CODE always wins.