Previously, on MinerBumping... Tase Ahashion had a case of the carebear blues. His corp, TLC Thunder and Lightning Corporation, was rapidly losing its members due to suicide ganks and wardecs from the New Order. Tase contacted the only person from the New Order he trusted, Agent loyalanon. His trust wasn't misplaced; loyalanon told him frankly that he needed to buy mining permits. Tase became very upset and made a scene on the forums. Then he filed a petition with CCP. 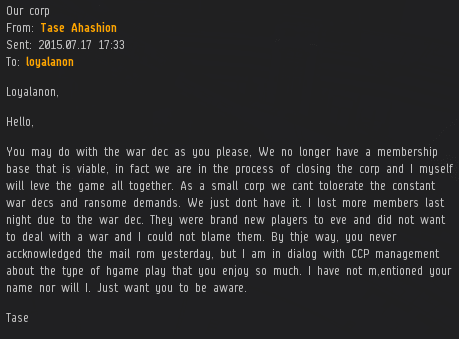 Tase's conversations with CCP were ongoing. He hoped for a positive result, but any assistance from CCP would arrive too late. Tase's corp was completely imploding. Tase disbanded his corporation and dropped out to an NPC corp. 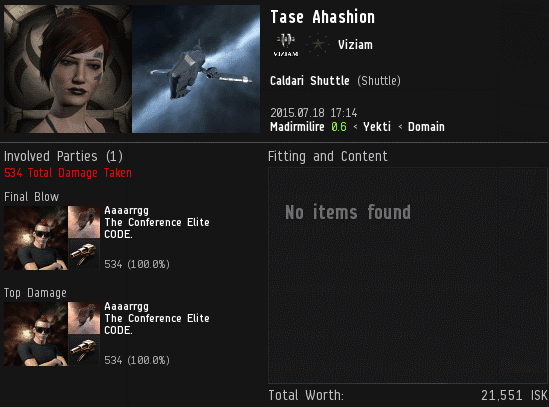 The New Order watches all highsec. The next day, Tase found himself on the receiving end of a gank from Agent Aaaarrgg.

Though the gank was unrelated to everything that had happened previously, Tase was still sore about the loss of his corp. He took it out on Aaaarrgg. Without any justification, he threatened to report Aaaarrgg to loyalanon. Tase had powerful friends in the New Order.

Aaaarrgg was not intimidated, so Tase made good on his threat and sent a petition to loyalanon. 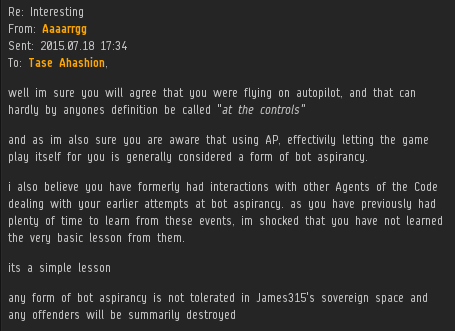 Our Agents are natural educators. Aaaarrgg broke everything down in terms that Tase could understand.

However, Tase still needed an attitude readjustment. He thought himself too big a fish to be "handled" by an ordinary Agent. Either loyalanon or CCP would need to step in. Unfortunately for Tase, all he got was radio silence. 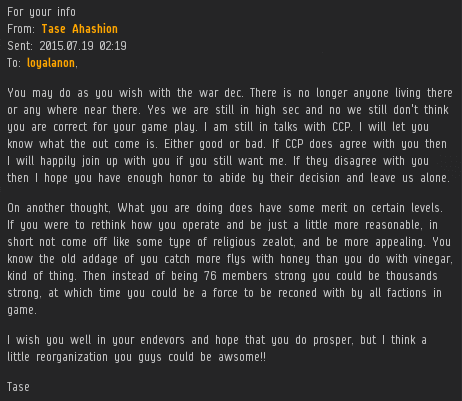 The next day, Tase gave loyalanon another status update. His corporation was finished; his dozen or so PvE'ers had abandoned him. He was still hoping to get a ruling from CCP about the New Order. Perhaps being freed of the burden of running a floundering carebear corp had lifted Tase's spirits. In a better mood, he offered loyalanon much advice about how CODEdot should be run. Because EVE's #1 PvP alliance would be much more successful if only it got input from an expert on leadership like Tase. 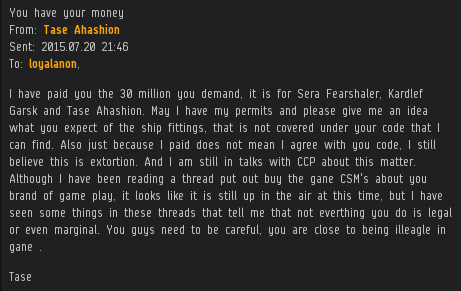 Tase complied. He still felt CCP might one day shut down the "extortion" conducted by the New Order. But he could no longer wait. For the sake of survival, he bought a permit for himself and his alts. Still, he warned loyalanon that he was skating on thin ice.

Tase didn't take as much joy in his new permits as one would hope. He accused loyalanon of being rude. However, there is no record of such rudeness. loyalanon replied with an EVEmail instructing Tase that their business was concluded. 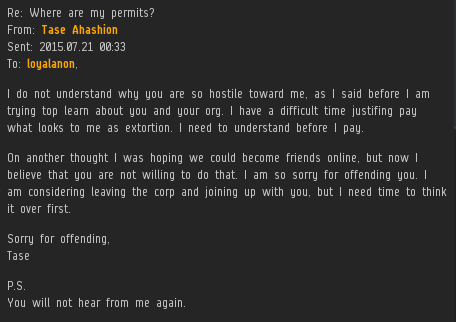 The carebear was in a state of confusion. He told loyalanon that he wouldn't contact him again, but also suggested he might apply to join the New Order. At any rate, Tase wasn't ready for CODEdot just yet. He reactivated his old corporation. This time, he wouldn't bother recruiting. The corp was only for Tase and one alt.

Although Tase Ahashion remained a work in progress, he'd come a long way. For the sake of comparison, here's Tase before he encountered the New Order: 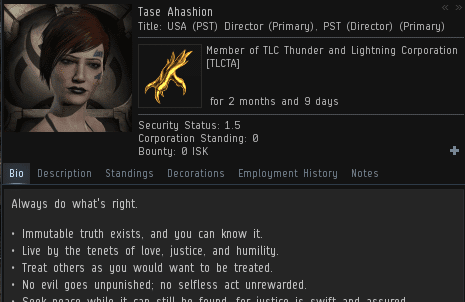 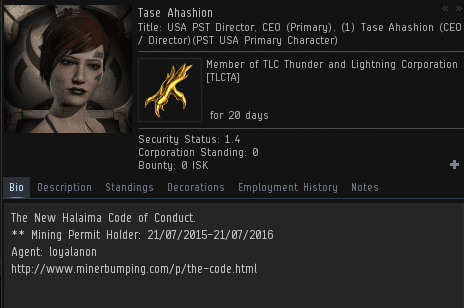 A considerable improvement, as I'm sure you'll agree!
Posted by MinerBumping at 16:01