Rebel carebears often suggest that if the New Order continues to have its way, one day there won't be any miners left to gank. We'll address that issue when it occurs, but another question is raised: What will the New Order do when everyone owns permits? Obviously, our job will be to rule over them. As the permit-owning population continues to grow, proper enforcement and regulation of permit-owning PvE'ers will be a bigger issue for the New Order.

A new player named dura saunders was caught auto-piloting about two weeks after she began playing. She was prevailed upon to buy a permit. But then, a few weeks later, Agent Liek DarZ caught her in the act of mining AFK in a Venture. When Liek ganked her, she spoke disrespectfully to our Agent--dura's superior. Her mining permit was promptly revoked.

Click for full-size version
Suddenly, dura saunders was filled with deep regret for her behavior. She wrote an apology EVEmail to Agent Get Well Soon, who had been notified of the permit revocation. Get Well Soon's job was to determine whether dura saunders deserved to have her permit restored.

The miner was now displaying the humility and deference that a miner should always show toward the elite warriors and heroes of the New Order. However, the apology EVEmail had nevertheless contained excuses drawing upon events from dura's real-life job. The Code says, "Miners are required to put aside their prejudices and treat gankers with respect." The Code does not say "...unless you had a rough day at work."

In order to make his final decision, Get Well Soon required additional information. He wanted to take the measure of the miner.

Our Agent learned that dura saunders had once tried to shoot a fellow corp member. In the past, that wouldn't have resulted in CONCORD intervention, but because of the awox nerf, dura had been CONCORDed and lost security status. (So much for making game mechanics more intuitive!)

As Get Well Soon discovered more about dura's history, he became more hopeful.

Our friendly Agent taught dura how to locate her lossmails, so he could instruct her own how to properly fit a Catalyst. And she certainly needed the help. dura had recently lost one of the worst-fit Scorpions you could ever imagine.

Now the Agent had a plan for reforming the wayward permit owner. 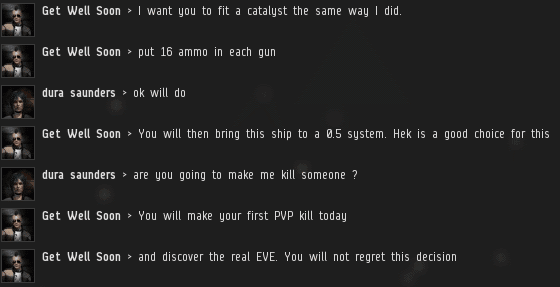 "Are you going to make me kill someone?" It's a question we'd all like to hear more miners asking. 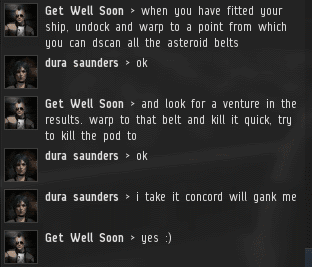 Get Well Soon sent the miner to Hek. Now dura would search for someone else mining in a Venture, just like she had been. The miner would be CONCORDed, just like she had been on the day when she'd tried to shoot a corp member. But this time, she would take the fires of CONCORD upon herself voluntarily. Purposefully. 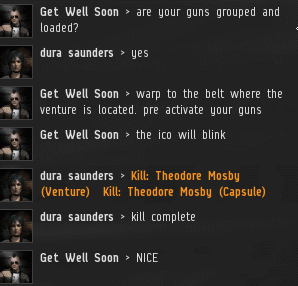 The redemption of dura saunders was at hand. 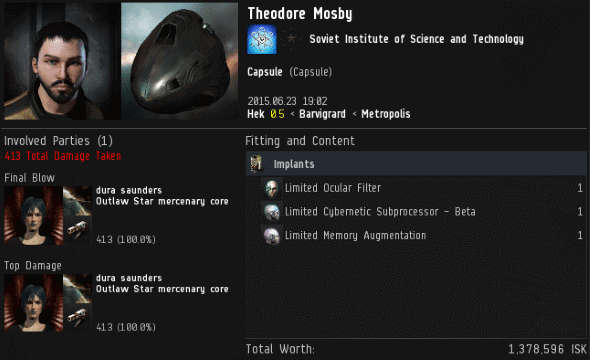 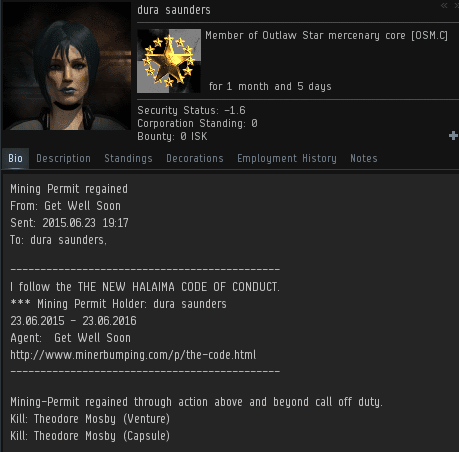 Get Well Soon was pleased. He restored dura saunders to permit-owning status. The repentant miner was once more a member of the New Order family in good standing. Having tasted victory for the first time, she no longer had an interest in mining. dura later found her way into wormholes for some fun.

...And that's how mining is done in modern highsec.
Posted by MinerBumping at 19:18