Previously, on MinerBumping... Agent ST0NER SMURF of Vrix Nation corp has been busy. The bot-aspirant autopiloters of highsec, on the other hand, have been lazy--and reckless. In studying these Code-violating malefactors, we discovered that they're quick to deploy F-bombs. Are they capable of anything else?

In the past, we've seen that autopiloters like Camyla Monica Jiang take their pod losses quite seriously, even in cases where the pod was completely devoid of implants. However, many carebears refuse to give their gankers the satisfaction of showing how much they care. Indeed, they frequently go out of their way to give off an air of indifference.

The most cliché response in this vein: I'm glad you ganked my pod because it got me to my destination sooner.

In reality, we know that this is (yet another) carebear lie. Those who truly wish to take the "Pod Express" don't need a ganker's help.

A more amorphous response: "You're a 'noob' for ganking me." Presumably, a skilled, experienced player is incapable of destroying the carebear's ships.

Then there is the classic: "I'm winning the isk war when you gank me." And yet, after experiencing the gank, the carebear is much more careful. Why does he stop autopiloting?

Agent ST0NER SMURF sends out surveys to each of his gank recipients. Most of them fail to fill out the paperwork, but not all: 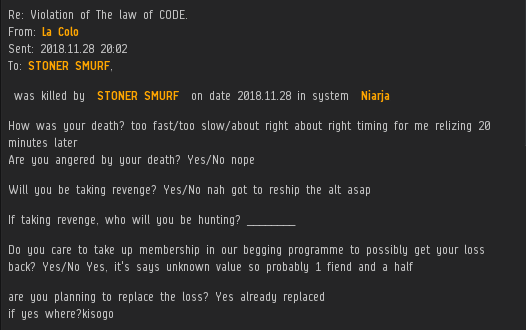 A confession of guilt accompanied by a claim that his loss was already replaced. We don't need Big Data to tell us that this was a bot-aspirant.

The Code is only impossible to follow if you're a Goofus. Everyone else obeys the rules without the slightest difficulty. In fact, good EVE players enjoy obeying the Code. 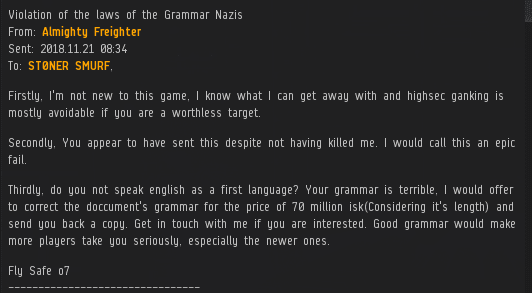 Almighty Freighter can't understand why he received a message from Agent ST0NER SMURF. After all, ST0NER SMURF never ganked him...

...Except for the time when ST0NER SMURF ganked him. This was likely a case of faulty memory, since the carebear didn't send his reply until nearly a month after the event. Must've been AFK.

Imagine not realizing that getting a free rookie ship is unrelated to being ganked. Then imagine bringing a rookie ship to Jita so you can sell it there.

It must be awful to live as a Goofus.