Previously, on MinerBumping... Agent ST0NER SMURF of Vrix Nation corp shared some of the tearmails they've been receiving lately. We learned that a large fraction of the carebears who lose their pods are desperately concerned with making sure nobody knows how much they care about their losses.

Time for another category--another bucket of tears. 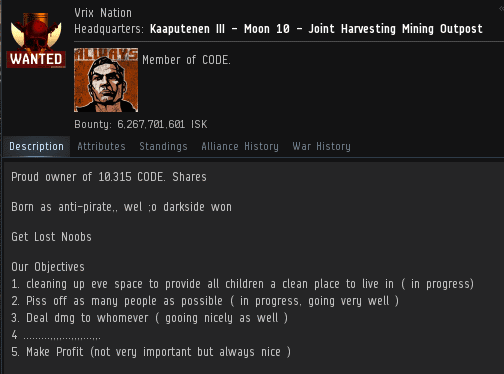 First, a little advice: Carebears, if you encounter someone from this corp, you're gonna need this:

That's right, the Code. It's your only hope. Excuses will not save you if you fail to comply.

Strangely, many carebears do send our Agents EVEmails full of excuses. They try to explain away their bot-aspirancy, presumably to lay the groundwork for a reimbursement request.

And no, being a member of this exclusive group does not give you a free pass. (But you can buy a pass for 10 million isk.)

Some of the excuses betray a lack of understanding of EVE's game mechanics. How do you get blown up while docking, if you warped to the station using an insta-dock bookmark?

I mean, you did use an insta-dock, right?

While some blame lag or dodgy EVE mechanics, others invoke client-side technical failures. Curiously, carebears only seem to experience problems with their computer while our Agents are shooting at them. Nevertheless, it is the responsibility of each EVE player to ensure that his computer is in proper working order before entering highsec.

Here's another common excuse: "I wasn't AFK, I was just looking at the market, my cargo, my EVEmails, my wallet, my corp chat, my private convo..." In this case, the greedy carebear condemns himself with his admission. He was admiring his cargo like some miserly old Scrooge counting his money.

When a carebear steps away from his keyboard for "ten seconds", you can be sure that it's the exact same ten-second window during which he'll be ganked by one of our Agents. Of course, if you only need to leave the game for ten seconds, you should have no problem docking up for such a small amount of time, right?

EVE Online. The wash. Pick one.