Somebody Close to You 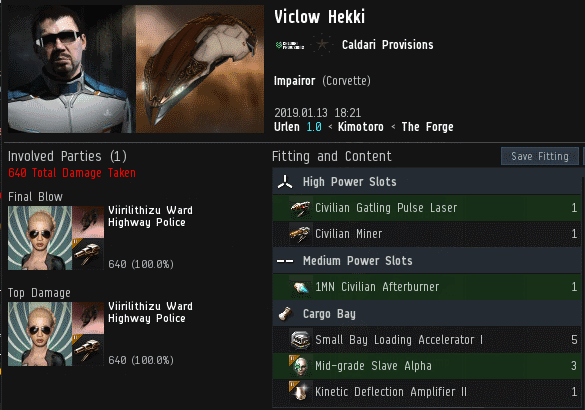 At this point, of course, the Anti-Gankers out there (are there any left?) will whine about shooting new players in rookie ships in 1.0 security systems. Let's have a look at that employment history, though: 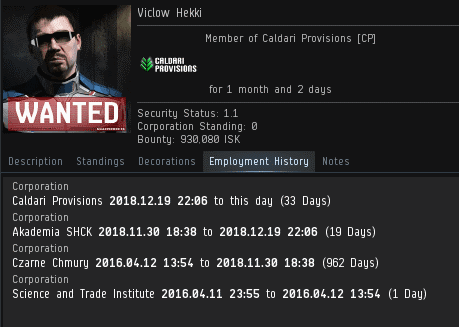 Viclow started EVE a couple of years ago. Remember, he said he was a "generally new player", which seems to be a variant of the infamous "new returning player".

The autopiloter again begged our Agent to reimburse him for the loss. His future in EVE was at stake.

Viirilithizu's good sportsmanship left the miner cold. All he cared about was money. Time to open his eyes:

Our Agent gave Viclow the gift of a link to the Code. She even dropped a "Praise James 315!" in there for good measure. To be sure, this is a potent combination. But a bot-aspirant carebear, if he has a lot of darkness in his heart, can react to the combination like a vampire to sunlight.

Yup, looks like Viclow was a foul creature of the night.

Agents of the New Order wear a lot of hats. Our Agent put on her therapist hat and gave the miner some sound advice. Viclow was again confronted with the choice of whether to behave like a Goofus.

Viclow told our Agent that she would be in his thoughts and prayers.

The next day, having had an opportunity to reflect upon his conduct, Viclow sent our Agent an apology: 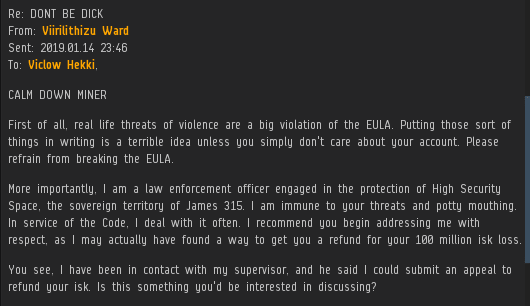 Feeling nothing but compassion for the miner, Viirilithizu did her level best to save Viclow from being banned. She even explored ways to get the miner some money so he could get back on his feet.

Alas, Viclow was too far gone. After one more attempt to get the miner to see reason, Viirithilizu received this final message from Viclow: 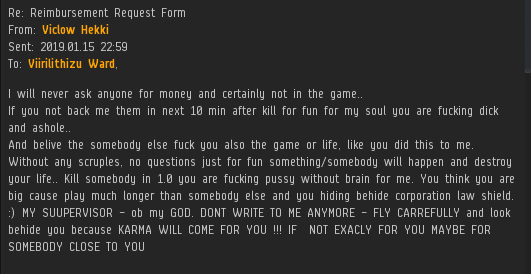 Viclow didn't care about the isk anymore. He was broke, but he wasn't interested in pursuing a reimbursement claim. (After all, Viclow would never ask anyone for money.) The miner had only one purpose now: Giving voice to his rage. It's a good thing tearmails can be produced for free.
Posted by MinerBumping at 18:02