Previously, on MinerBumping... We examined three different buckets of autopiloter tears, each one revealing a serious character flaw shared by the non-compliant carebears.

For the fourth and final "bucket", we have the carebears of the highest caliber.

It is our Agents' fondest wish that the carebears they gank will abandon their bot-aspirant ways and take up the fine art of PvP. Even if a rebellious carebear attempted to seek revenge against an Agent, that would be a better result than if the carebear spent the rest of his days AFK mining.

However, there's a problem: The carebears who make these veiled and not-so-veiled threats of revenge never act on them; they remain bot-aspirants. Thus, the best carebears must be of a different kind entirely. 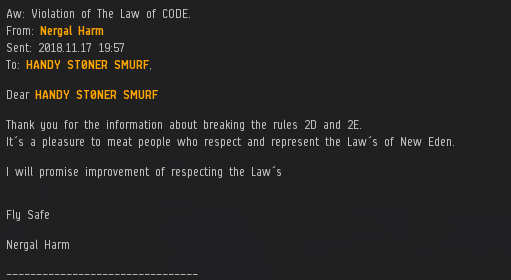 I speak, of course, of the grateful gank recipients.

To the skeptics and Anti-Gankers out there, this comes as a great surprise: Many people who get ganked actually thank the person who ganked them. And they mean it!

Messages like these shouldn't take anyone off guard. EVE Online is a PvP game. Besides bot-aspirants, EVE attracts people who want to see spaceship combat--even at their own expense.

And, lest we forget, ganking improves player retention. It only stands to reason that people should have some positive feeling about being ganked.

Moreover, the truths of the Code are undeniable. So why bother denying them?

Agents of the New Order are also known for their great wit. Good people enjoy being around Agents, even if it involves getting shot by them.

So I ask you, carebears of highsec: Would you rather show gratitude like one of the gank recipients shown above--or would you rather be like this guy:

Highsec is watching, carebears, and you will be judged according to how you respond to your losses.