Where Do Bots Come From?

For the past few months, much of the EVE community has voiced its outrage at the bots who plague our beloved virtual galaxy--and at the failure of CCP to do anything about them. Curiously, even some high-profile botters like the notorious Nyx bots have been reportedly reappearing after taking short breaks from the game. This has led to widespread speculation that botters have been receiving only temporary bans, or in some cases no bans at all.

It's true that CCP needs to do a better job of banning bots, even if that results in a lower logged-in player statistic. Regardless of whether CCP is unable or unwilling to remove the bots from EVE, CCP is not the only guilty party here. When it comes to botting, those with the greatest degree of guilt are the botters themselves. Botters knowingly and intentionally violate the Code.

Most people shrug their shoulders when they hear talk about the botters' guilt, or punishing the botters, or--heaven forbid--teaching the botters to embrace the Code. "What good does it do to speak of such things?" they ask. "Botters aren't even people. They're machines."

Is it true? If so, one might say the same thing about bot-aspirant miners or autopiloters who, like the bots, barely interact with the EVE client. As I have said for many years now, the only difference between a botter and a bot-aspirant is a few mouse-clicks per hour.

Yet we have a different image in our mind when we think of the botters, don't we? In the popular imagination, botters are from Russia or China or some other place where they don't use our alphabet. We see in our mind's eye a bunch of computers sitting in an empty room, or a sweatshop. We imagine the botters spitting out Cyrillic "moonspeak" when they discover their fleet of Mackinaws has been destroyed. To our eyes, that's not so different from a series of 1's and 0's streaming out of the botter's program itself.

All of this has a dehumanizing effect. The man behind the bot is distant not only from his keyboard, but from us. Botters come from some faraway place.

But do you realize, friend, that this is exactly what the botters want us to think? No one does more to promote the stereotypical view of the botter than the bots and bot-aspirants themselves. Consider the implication: If the bots are all operating out of some dimly lit Chinese warehouse, then they're not being run by the English-speaking miner in the asteroid belt next door.

Dear reader, the truth is that the botters are among us. They're in our midst. They've been staring you right in the face. Today's petulant gank recipient, who vows revenge from inside a station, is tomorrow's botter. Indeed, some of the chattiest miners are the future customers of macro sellers.

"Bot-aspirant" isn't just some strange-sounding term that we all use out of habit. It describes, in a very precise way, the condition of the typical AFK miner. Yes, typical. Potential botters are all around us. 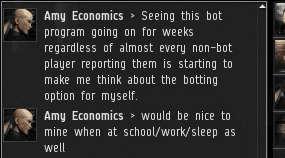 Put the stereotypes aside. You know what the average bot-user looks like? He--or she--looks very much like the average bot-aspirant. That's where bots come from. They're absolutely ordinary EVE players whose bot-aspirancy was allowed to persist for too long.

The life-cycle of the bot: They join EVE as new players with visions of spaceship combat dancing in their heads. For various reasons, they put their dreams aside and spend their time slowly grinding isk in highsec. Unable to come up with a way to make money more quickly, they instead focus on making their isk-grinding more efficient. Little by little, they automate their activities and minimize their interaction with the game. They grow to envy the bots more and more until one day--poof!--they take the plunge and install a botter program.

The EVE community's hatred of bots is ironic, for many of those same people also hate the mighty CODE. alliance for daring to gank bot-aspirants. They might as well say, "Kill all the cane toads, yes, we hate them--but don't you touch the tadpoles."

One cannot fight the bots without first understanding the truth of who they are and where they come from. Once you understand these things, the solution becomes obvious: the Code!
Posted by MinerBumping at 18:03