Previously, on MinerBumping... Grateful gank recipients thanked our Agents for ganking their autopiloting pods. They confessed their crimes and promised henceforth to obey the Code.

"But James 315," you say. "I thought we were going to look at four different categories of autopiloters. It even says so in the title of the post. So how, then, are we on Part 5?"

Not all of the tearmails sent in by gank recipients fall into one of the four "buckets" we looked at in earlier editions of this series.

Should they be taken as signs of creativity or originality? No. These strange shapes are merely the malformed detritus of carebear "thought"--such as it is.

The tearmails we're looking at today don't go into one of the four buckets; they go into the litterbox.

Tearmails written in broken English usually fall into this category--even if you can assemble the vague outlines of the carebear's muddled thoughts.

But it's not about the type of language used, or the carebear's grammar. Tearmails are produced by the carebear's emotions. They're like little sparks that shoot out when a carebear's pod explodes.

One might assume that all such tearmails are fragmented in this way. But as I said, it's not the style--it's the substance that's half baked. See below: 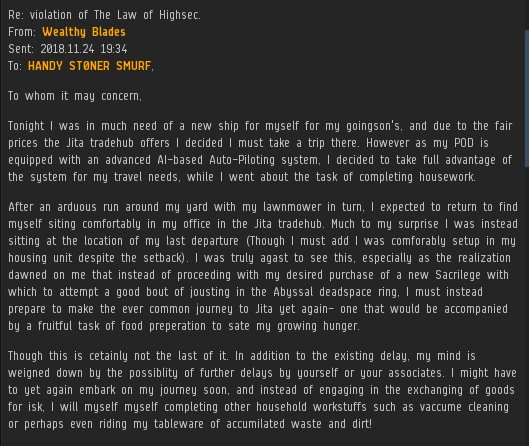 So many words, so little wisdom. A simple "I promise to be better, 10 mill is enclosed" would've been a better choice.

At the core of the Goofus is his belief--fueled by selfish emotions rather than reason--that the destruction of his pod is someone else's fault. All too often, he blames the ganker.

"You defeated me in PvP, so you must be a bad person."

What the carebear should be thinking is, "You defeated me in PvP, so I must have violated the Code. Now it's my job to make amends. GF."

The carebear's ideas are bad, but so are his emotions. He shouldn't be upset to lose a pod while autopiloting, no matter how expensive his implants were. He loses his Capsule, but he gains an audience with a legend: an Agent of the New Order! Carebears, the EVE that our Agents can show you is worth far more than your implants. Listen to ganker.