Sometimes the Drones Are Smarter Than the Miner

Agents of the New Order are exceptionally good at getting Code violators to admit their crimes. It's not always challenging, though.

The miner belonged to Clondike -entertainment and digging corp. When he met our Agent, Vazqez was less focused on entertainment than digging--a word Russian EVE players commonly use when referring to mining. 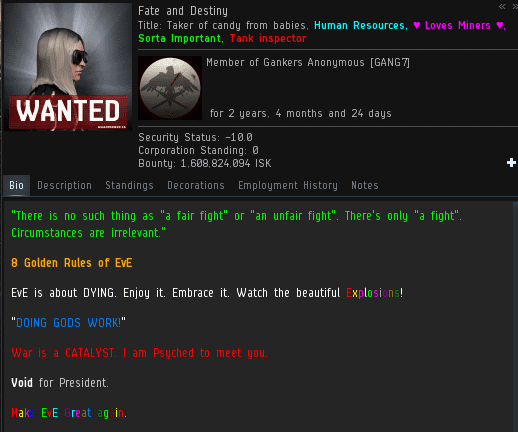 Agent Fate and Destiny planned to spend the day shooting some barges and exhumers; she didn't bring any Orca-removal equipment. So she did the next best thing and deleted the miner's drones.

Vazqez insisted that his mining operation was an emergency. He desperately needed to continue. But unless he got a permit, mining in highsec was completely out of the question.

The miner sent mixed signals. Something was getting lost in translation.

Watch this guy complain that "Nobody ever told me about the Code!" the next time he loses a mining ship.

Without his drones, Vazqez's Orca was a billion isk paperweight. The greedy miner floated in space, hoping for a solution that didn't involve opening his wallet.

Vazqez had a strict policy against negotiating with terrorists. He felt he was honour bound to spend the day sitting in a neutered Orca.

Of course, Agent Fate had more important things to do than babysit a droneless Orca. While Vazqez stubbornly awaited some kind of credit for his lost drones, Fate moved on and continued to help save highsec. I leave it to the reader to decide who made better use of their time.
Posted by MinerBumping at 18:03