Previously, on MinerBumping... Miner Lilypetals Makanen went mad when she witnessed some other carebear's ship getting ganked by Agent Alt Aurelia's fleet of Caracals. In her fury, she threatened to petition our Agents for falsely claiming to own highsec. 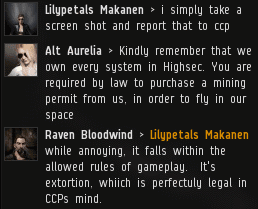 One reason the anti-Code rebels have failed to gain traction for their cause: They alienate everyone they come into contact with--even random passersby. 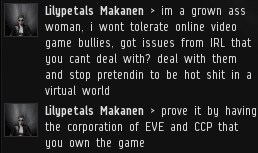 Though it was clear that she wasn't gaining any support, Lilypetals was no closer to finishing her tirade in local chat. In fact, she was only getting warmed up.

Raven Bloodwind was merely passing through the system, but he felt compelled to stop and point out the miner's foolishness. Not a good sign for your popular uprising, carebears.

Earlier, Lilypetals claimed that she'd been radicalized when her girlfriend was repeatedly ganked by the mighty CODE. alliance. Naturally, she was unwilling to solve the problem by spending any of her own money.

Raven wasn't a Code supporter, but he encouraged the miner to take a course of action that didn't involve so much whining. But that path was too moderate for Lilypetals.

To be clear, the New Order has never claimed to own CCP. It should be obvious that we do not own CCP; EVE would be so much better if we did.

It's not uncommon for miner meltdowns to result in the miner getting hung up on one particular word or phrase. Lilypetals couldn't stop saying the word "bully". 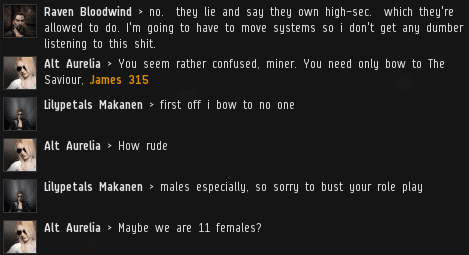 By this point, Agent Alt suspected Lilypetals of being a Goofus. To be certain, Alt name-dropped the Saviour of Highsec. The miner's condition did not improve.

When the miner began creeping into "empty threats" territory, our Agent was quick to shut her down. At Lilypetals' speed, it would take all day to get through that routine.

Luckily, Alt was able to get Lilypetals to backpedal her threats of revenge. But then our Agent said something that triggered the miner.

Was this miner ever going to calm down?