The New Order kills a lot of highsec miners. Some of them respond by purchasing a mining permit, as the Code requires. Others become notorious. 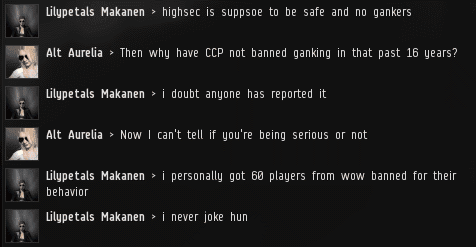 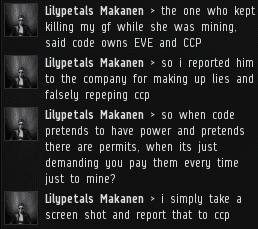 But what about the miner's point of view? On occasion, a miner will hint at his or her origin story. In the case of Lilypetals Makanen, she was driven to rebel against the Code because she wanted to avenge her girlfriend. 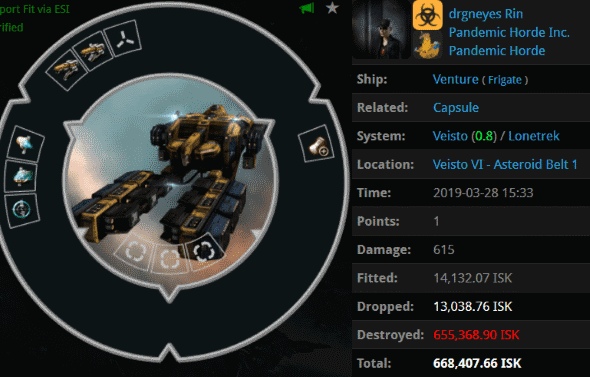 Today we'll learn about Lilypetals' girlfriend, a Venture pilot who was ganked while mining in highsec despite being a member of Pandemic Horde.

Agent Aiko Danuja expected more from drgneyes Rin. Members of Pandemic Horde ought to be found mining in nullsec (or lowsec, as the case may be).

Our Agent soon learned that communicating with drgneyes would require a bit of effort. drgneyes was primitive. "send week playing need veldspar"? She sounded like some sort of carebear caveman.

If you've ever wondered if anyone has ever actually failed one of those Level 1 mining missions, the answer is apparently yes.

Corporations like Pandemic Horde Inc. and Karmafleet claim to be "new player friendly". But let's be real: The system fails a lot of newbies, and it's up to the New Order to help those who fall between the cracks.

Here we see an intriguing hint about the history of drgneyes and Lilypetals. It turns out that Lilypetals, too, was once a member of Pandemic Horde. She was kicked out after having a meltdown in one of their channels. Somehow that doesn't surprise me.

(Pandemic Horde, if you're listening, I hope you can find the logs of that conversation.)

Though Lilypetals was expelled from Pandemic Horde, drgneyes was unwilling to quit and join her girlfriend in exile--for now. But she couldn't count on Pandemic Horde to assist her with the Level 1 mining mission. She'd need Aiko's help.

At first, drgneyes was interested in learning how to buy a permit. But when she found out that it involved spending money, well, that was a deal-breaker.

Agent Aiko interpreted what drgneyes was telling her. This required patience. At least with Russians you can use Google Translate.

As far as our Agent could tell, drgneyes was reluctant to embrace the Code. The miner wanted a free lunch.

Finally, the miner spelled out her demands: She wouldn't buy a permit unless her Venture loss was triple-reimbursed. Could our heroes save drgneyes and persuade her to obey the Code?

...Well, no. Obviously not. This is a prequel to the post about Lilypetals.

But still, could they?