Over One Trillion Eight Hundred Nine Billion in Shares Sold

Those who "win" EVE by leaving the game sometimes get asked the question, "Can I have your stuff?" I never ask; I know the answer. Of course I can have their stuff. The New Order will make good use of it, too.

Alexander Kirenski's liquidated assets went toward the purchase of 2,051 shares. This ensured his legacy and also got us to the 1,808 and 1,809 billion isk marks. Alexander earned a Double Supreme Protector's Tip of the Hat™ and the appreciation of highsec.

We all know that MinerBumping features field reports from our brave and noble Agents. Every so often, we'll get a report from an anti-Code type. Though such reports are invariably dishonest, they offer us a different perspective.

Zein Adoudel was ganked by Agent Lewak and friends. He tried to help her see reason. Zein asked me a bunch of uninteresting questions, so we'll skip those and get right to what she sent Lewak a month after she was ganked.

Zein claims to have made a good-faith effort to become an Agent. Did she? Considering she cited the Phantom Provision at the first available opportunity, I'd say her heart wasn't in it.

According to this carebear, the mighty CODE. alliance doesn't gank miners or autopiloters.

Zein's conclusions are disturbing. I mean, she more than anyone else is a Code purist, right? Who better to judge our Code enforcers? 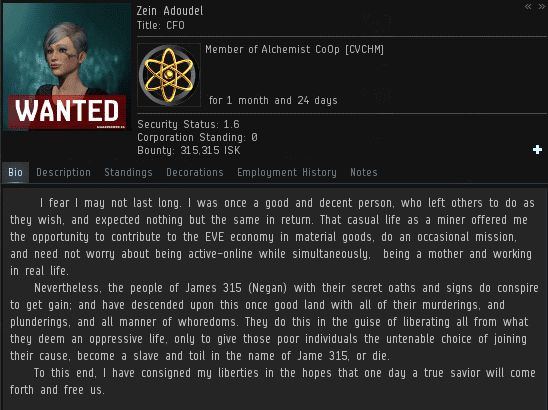 Does she still count as a Former Fan if she never approved of the Code in the first place?
Posted by MinerBumping at 18:02