The Goofusness of some miners is almost beyond belief. But our Agents have seen a lot of strange things in highsec.

Though Lilypetals couldn't deny her lack of PvP skill, she claimed to be a master of the art of the petition. Our Agent could not be intimidated, however.

Agent Alt had a dire forecast for Lilypetals' future, if the miner continued to reject the Code. Which, at this point, seemed likely.

The miner contemplated the possibility that her petitions to CCP might prove to be unsuccessful. How could she mine safely then?

Lilypetals had trouble fully processing Alt Aurelia's words, so she assumed the worst. Our Agent's kindness and forbearance totally went over the miner's head.

Agent Alt couldn't help but feel that at least some progress could be made--if only Lilypetals would actually read the Code. What was taking her so long?

One of the miner's many problems was her tendency to put her own words in other people's mouths. Another big problem was that she apparently felt hostility toward the Saviour of Highsec for no apparent reason.

Lilypetals couldn't imagine herself submitting to the local authorities. Nor was she willing to defend herself in combat. Needless to say, this is a bad combination.

Suddenly, our Agent had an eleventh-hour proposal: Would Lilypetals be more reasonable on TeamSpeak? Being in a welcoming environment and surrounded by friendly Agents might do the trick.

Agent Alt decided that her efforts would be better spent helping some other miners. The baton would be passed, though: Future acts of Code enforcement seemed inevitable. 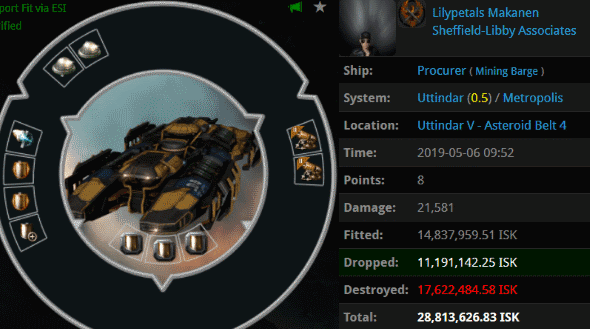 Incredibly, Lilypetals was willing to show her face in the Uttindar system again. While mining in a partially tanked Procurer, she was ganked by another group of Agents. Would they be able to get through to Lilypetals?