Who Is My Friend?

When you enforce the Code as an Agent of the New Order, you meet a lot of interesting people. 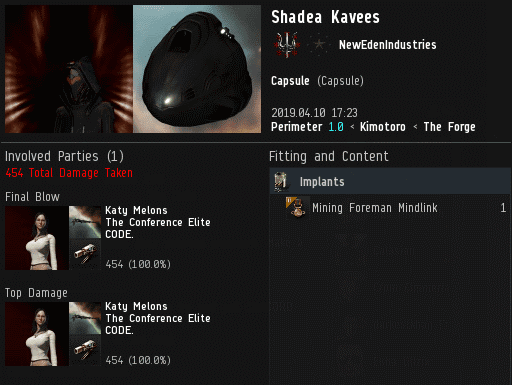 Most of them die. 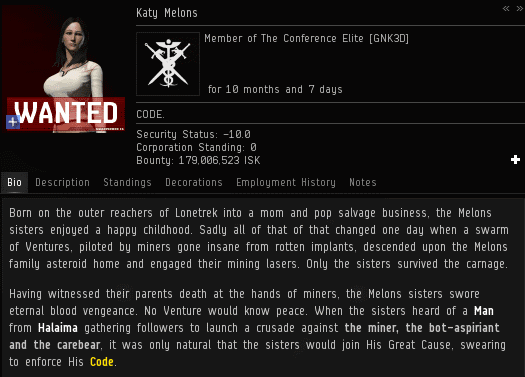 Agent Katy Melons watched a pod autopiloting its way to Jita, so she terminated it. But Katy had no idea what she'd gotten herself into. This time she'd ganked the wrong guy.

How's this for a plot twist? Shadea Kavees was as well-connected as anyone can be in highsec. He was best buds with the CEO of The Conference Elite and the Saviour of Highsec himself.

Katy ignored the provocative tearmail, so a few days later, Shadea updated our Agent with another piece of troubling news: An army of mercenaries was about to descend upon her. Payment had already been arranged. Now what? How was Agent Katy going to get herself out of this mess?

Her answer: the Code. Simply the Code.

Shadea was surprised by how calm Katy was. It was as if the Agent had completely blown off everything he'd just said about hiring mercenaries and knowing powerful people in highsec.

The miner taunted Katy by inviting her to stop him from mining in Bordan--which turns out to be a lowsec system.

...In other words, our Agent had driven the miner out of highsec. Another victory for the New Order!

For all of his bluster, Shadea had been defeated so effortlessly. Agents of the New Order are powerful indeed. But Shadea still had his trump card:

The miner had already mentioned his close personal friendship with the Saviour. Maybe Katy hadn't heard him the first time.

The miner couldn't help but recoil at the name of the Saviour. He knew he'd been beaten.

When their bot-aspirancy is punished, many a miner will call upon my name. It won't work for them. My Agents know how to identify a true friend of the Saviour of Highsec: All of my friends follow the Code!
Posted by MinerBumping at 18:04