To be honest, I don't think he's actually coming back.

Highsec has a lot of misguided miners. How do you get someone like this to buy a permit? 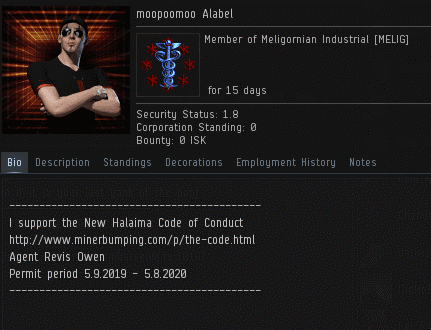 I suppose you'll have to ask Agent Revis Owen, because somehow he managed it.

Time for a little pop quiz to test your Russian, dear reader. What did this miner say to our Agent?

If you guessed "premature cunt to get you the rest of your life fucked from ass to mouth", then well done! Now for round two:

Only those who speak Russian would be able to get this, because unlike the previous one, it's not guessable.

"I understand what I did wrong. I forgot that there are people in the game whom I do not understand. I apologize for the sharp reaction and obscene language. I was wrong"

You know, I don't recall ever seeing someone apologize in Russian before. Now we know the vocabulary exists for it.

Imagine the isk/hr for a guy who spends six hours mining to buy a Venture. He must've known what he was signing up for, though. His name was Eve Conflict! 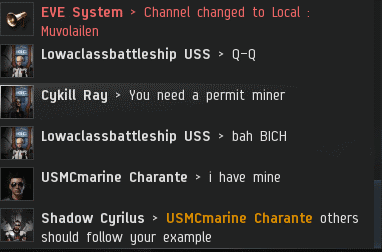 Nothing shames an unlicensed miner like a miner who obeys the Code.

The name of the Saviour of Highsec is always good for flushing out treasonous carebears.

The definition of "new players" can be quite elastic: Anth9rax joined EVE over 13 years ago. There are players who weren't born yet when Anth9rax created his account.

It sounds like CODSoulReaper just volunteered to be a New Order reimbursement officer.

One method for dealing with self-appointed reimbursement officers is to occasionally say "gf" in local and link the name of an Agent. The do-gooder may inadvertently send reimbursement isk to your fellow Code enforcer.