Previously, on MinerBumping... Agent Alt Aurelia has had a distinguished career of Code enforcement. But instead of showing Agent Alt proper respect, Lilypetals Makanen chose to repeatedly compare her to a rapist. What a Goofus! 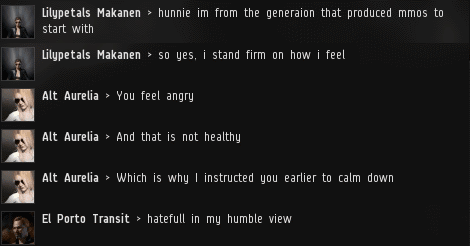 Lilypetals' antics earned her the disgust of everyone in the system. She was digging herself into a hole like only a highsec miner can.

Yet Lilypetals seemed to be impervious to public opinion. She doubled down on her outrageous accusations.

The miner's ignorance was clear to all. Agent Alt graciously offered to provide Lilypetals with the information she'd need in order to calm down and buy a permit.

If you've ever filed a petition and wondered why it took so long to get a response, Lilypetals and her ilk are part of the answer. (CCP's inefficiency is the other part.)

For whatever reason, the miner just couldn't get over Agent Alt's offhand remark about the authority of the Saviour of Highsec.

Lilypetals' ideology appeared to be a strange brew of hair-splitting and ego-tripping--and full of contradictions. In reality, it was, at its core, a series of rationalizations for her bot-aspirancy. She wanted total safety to grind isk AFK. Nothing more.

The miner sensed that she was getting nowhere, so she changed the subject. She certainly didn't want to talk about her lack of PvP prowess.

It seemed as though Lilypetals was gearing up to interrogate our Agent. This was unnecessary, though: The New Order is the most transparent organization in EVE. All of our motives are published for everyone to read.

The angry, raging miner wasn't interested in reading the Code. She wanted to continue her tirade. So she did.

Agent Alt found that it was difficult to have a conversation with Lilypetals. The miner was a whirlpool of negativity. Our Agent was a rock of positivity--and reason.

But surely the miner couldn't get any more foolish?