Two Roads in the Darkness, Part 2

Previously, on MinerBumping... During his travels, Agent Hero Of HiSec met two miners, PIKKKKA ZHAO and Lamprey. On the surface, they couldn't have been more different: PIKKKKA was unruly and mined AFK; Lamprey was polite and owned a permit. 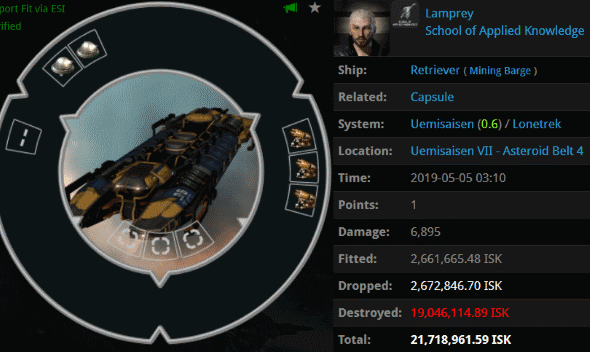 Agent Hero was shocked as he found himself ganking Lamprey, whose Retriever was untanked. 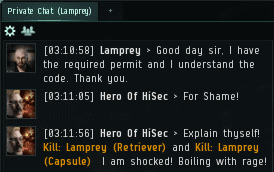 Hero couldn't believe that Lamprey, who had so pleasantly greeted him when he entered the system, would violate the Code in this way. Our Agent was filled with righteous indignation. 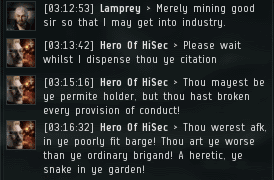 Agent Hero now had the unpleasant task of deciding whether or not to revoke Lamprey's mining permit. At this moment, he was inclined to do so.

When permit-holders get ganked, they typically have a meltdown--proving that they were never truly Code-compliant to begin with. But Lamprey's reaction was more reasonable. 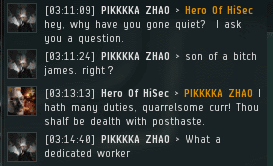 Meanwhile, in local chat, the other miner was growing restless. 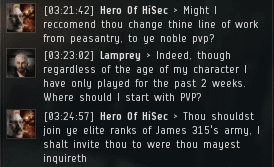 Hero's first priority was to attend to Lamprey's rehabilitation in their private convo. PIKKKKA would have to wait. 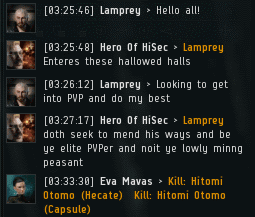 Lamprey was invited into the MinerBumping channel, where he was expected to seek out an Agent to help him transition from miner to ganker. 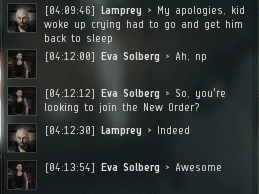 The miner used his child as an alibi--never a good sign. His future was uncertain.

All this time, PIKKKKA had patiently waited his turn. He still wanted revenge for the loss of his own Retriever an hour earlier. 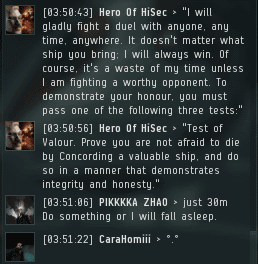 Agent Hero was eager to have a fair, honourable 1v1 with PIKKKKA. Provided that the combat was conducted according to his chivalric Code, of course.

Our Agent won the battle when PIKKKKA forfeited. With the thrilling taste of victory in his mouth, Hero reflected upon the two miners, PIKKKKA and Lamprey. Both had lost Retrievers to him on the same day and in the same system. Yet the miners were so different in other ways. He could only hope that they would both find their way to a state of glorious compliance with the Code!
Posted by MinerBumping at 18:01