With the loss of her mining ship, drgneyes was destitute and in need of assistance. She was too strong and independent to ask for anyone else's help, so she demanded that our Agents give her a bunch of money.

Many of drgneyes' statements are open to interpretation. Agent Aiko Danuja theorized that drgneyes' "jump throw all red" comment referred to traveling back through nullsec after being podded. Her clone may still have been in Pandemic Horde space.

Aiko was tempted to think of drgneyes as Pandemic's problem, but our Agent knew that drgneyes wouldn't stop until she made it back to highsec.

With everything else highsec has to deal with, it didn't need to face the threat of an invasion by drgneyes. Aiko preferred to get the miner into Code-compliance.

The miner was determined to get back to her Level 1 missions, even if it meant traveling 40 jumps through hostile territory. She offered Aiko a compromise: She'd buy a permit, but only if it could be done through a secure channel.

Unfortunately, New Order mining permits are not yet an in-game item; it's one of the "little things" that CCP has been slacking on.

While they were still negotiating, drgneyes lost her ship. She would need to begin her journey again. 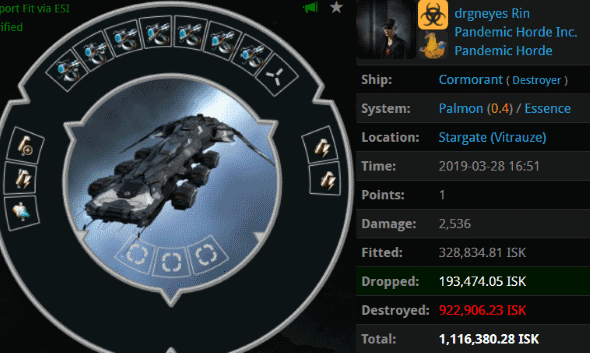 There were no easy answers to the problem of drgneyes. Some people just aren't cut out for EVE.

The miner suddenly realized that she had kill rights on Aiko. It was only a matter of time before drgneyes would get an opportunity for revenge. If she could get to highsec, that is.

Though English was apparently drgneyes' first and only language, our Agent struggled with the language barrier. drgneyes trailed off and went silent.

Aiko went to the Pandemic Horde recruitment channel for support. Maybe they could sort this thing out.

A diplomatic solution didn't present itself, but drgneyes was removed from Pandemic Horde a few hours later. The miner joined her girlfriend Lilypetals' corp. And the rest, as they say, is history.
Posted by MinerBumping at 18:04