Over One Trillion Eight Hundred Six Billion in Shares Sold

Brewlar Kuvakei is, believe it or not, one of our earliest shareholders. Since 2012, he has owned precisely 10 shares in the New Order. Now, seemingly out of nowhere, he decided to step things up. He purchased 1,000 additional shares, which brought us to the 1,777 billion isk mark. And it's a beautiful thing. Brewlar earns a better-late-than-never Supreme Protector's Tip of the Hat™.


Now let's take a look at what happened in Uedama this week.

A mysterious individual named Mycella Huren reported to the system and quickly found one of our Agents, PI Tool1.

Mycella's motives were unclear, but it soon became apparent that she was in a generous mood.

PI Tool1 checked her wallet and was stunned: Mycella had "tipped" her a billion isk, simply for responding when she'd asked for an Agent! 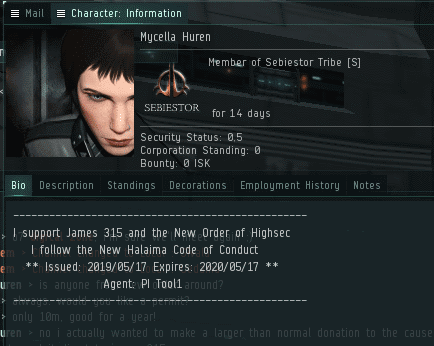 Shortly afterward, this Gallant stranger biomassed herself. She claimed to have sent everything else she owned to the Saviour of Highsec. Was it true? PI Tool1 had to wonder.

Yes, I can tell you that the wonderful tale of Mycella Huren is indeed true.

The story's not yet finished, though.

PI Tool1 took Mycella's billion isk tip and purchased 1,000 shares of her own. This brought us to the 1,806 billion isk mark and earned her a Supreme Protector's Tip of the Hat™.

I think that's what Mycella would've wanted.
Posted by MinerBumping at 18:03