Over One Trillion Eight Hundred Eighty Billion in Shares Sold 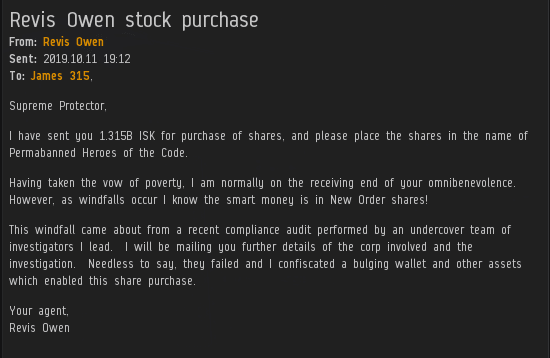 The Permabanned Heroes of the Code, despite being barred from the game, continue to play an important role in EVE. They inspire us all to greatness. As opposed to the legions of carebears, who log into the client each day but cannot inspire anyone.

Revis' purchase on behalf of the Permabanned Heroes added another 1,315 shares to their tally and produced a Supreme Protector's Tip of the Hat™. We have now reached the 1,880 billion isk mark.

Let us turn to Agent Revis' report. It began when he discovered some unlicensed carebears flying under the flag of Galactic Knights and Squires. 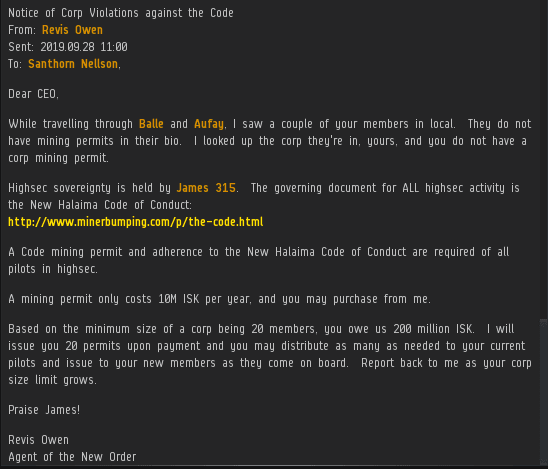 Naturally, Revis reported the illegal conduct to the corp's CEO. It is understood that in highsec, the CEO of each corporation serves at the pleasure of our Agents. 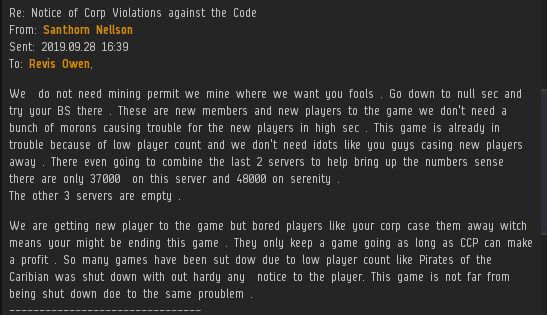 But Santhorn Nellson chose to rebel. His true motive was bot-aspirancy, but he claimed that CCP would go bankrupt and shut down EVE if his miners had to pay 10 million isk for permits.

Revis stuck to his guns. Our Agent knew that a terrible fate awaited Galactic Knights and Squires corp if it refused to comply. In that event, there would be no ambush. Santhorn Nellson would know that it was coming. It would be 100% his own fault.

Yet he chose the Goofus option, dooming his corporation. 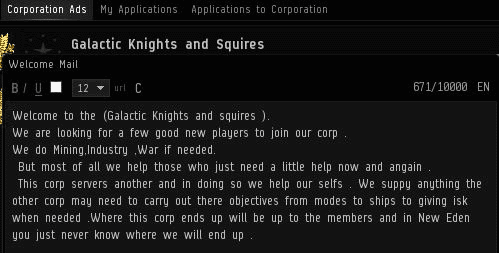 Agent Revis sent an alt to apply to join the corp. His application was accepted at once. The corp obviously hungered for more miners to exploit.

A few days before Revis confronted the CEO, his spy had already uncovered evidence of corruption in the corp. Santhorn Nellson had been attempting to impress his newbie miners by invoking the Rooks and Kings alliance, which he had absolutely nothing to do with.

It got worse: The corp had already set up some structures in highsec, apparently for the purpose of illegal mining. 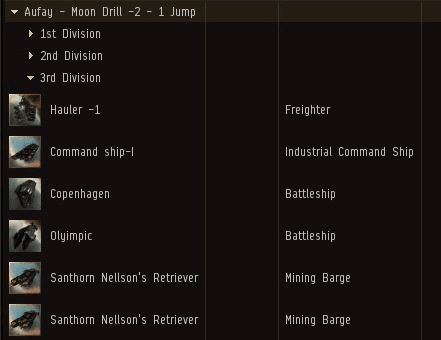 The spy also learned of multiple unlicensed mining vessels. Something had to be done. 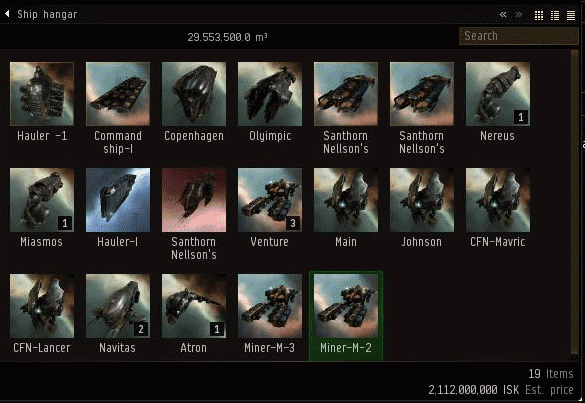 After Santhorn Nellson refused Revis' gracious offer of Code-compliance, things moved quickly. All of the corp's ships were confiscated. 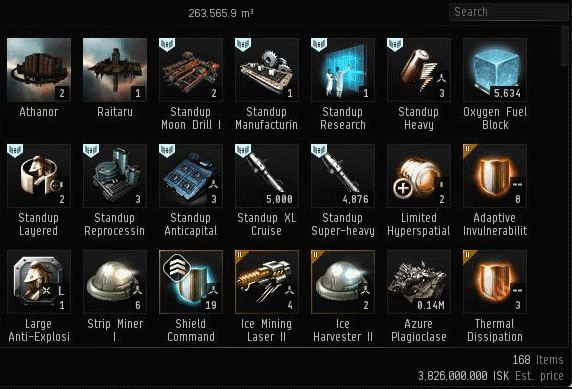 ...Along with their structures.

Both of the corp wallet divisions were cleaned out, as well. 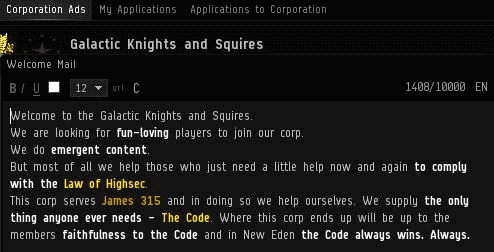 ...And the corp description. As for Santhorn Nellson, he was forced to resign from the CEO position. After all, he had presided over the loss of more than 7 billion isk. And he lacked a permit.

But old habits die hard. Santhorn created a new corp, Galactic Knight's and Squiers Inc. It seems he hopes to resume his exploitation of highsec. Our Agents will be watching.
Posted by MinerBumping at 18:04