Previously, on MinerBumping... anaCheeya ANARKY aka aiva naali aka "kingpin" aka "lil bullet" sallied forth into nullsec to pursue his ambitions. aiva's journey hit a snag when Vincent Vegas--a Goon and supposedly an ally--killed his unfit cruiser. Unbeknownst to aiva, Vincent had been tipped off to aiva's location by Agent Aiko Danuja.

aiva had big plans for nullsec--and his place in it. With his penchant for designing superweapons that no one else had ever thought of, aiva believed he could reshape nullsec to suit his whims. For now, though, he was stuck mining in highsec. Good thing he had a permit. 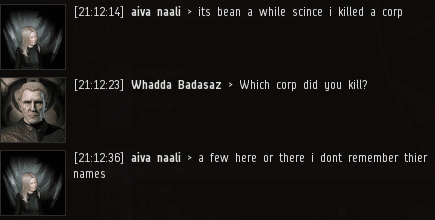 aiva toiled away in highsec asteroid belts awaiting the results of a Goon "security check". He didn't look like much, but it was only a matter of time before he let a few things slip.

Agent Aiko directed aiva to a public channel for New Order Logistics corp. That way, aiva could meet some fellow travelers while he was in exile. This, however, proved to be a dangerous temptation. 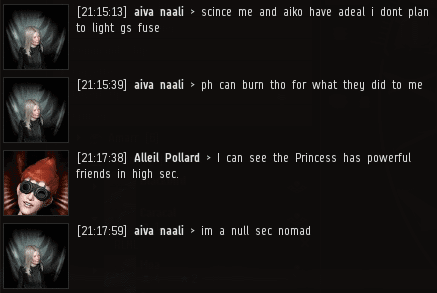 Finding himself in a relaxed and inviting environment, aiva spoke freely. Too freely.

aiva couldn't resist sharing secrets with his new friends. And they, in turn, were fascinated by what he had to say.

Like a Parisian café, rumors of revolution wafted through NOL's public channel. aiva found himself at the center of attention. 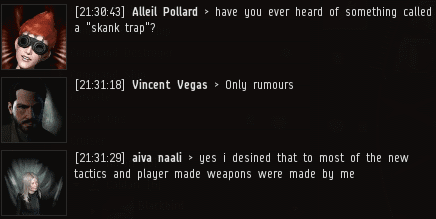 To aiva's delight, rumors of one of his superweapons had preceded him. Once the phrase "skank trap" was uttered, there was no stopping him. 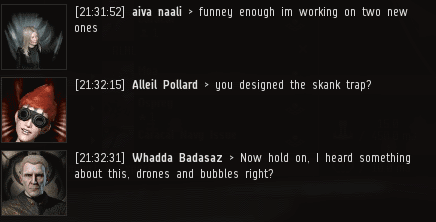 aiva's audience encouraged him to reveal more, but the miner needed no encouragement. In speaking about them, he felt his fantastic visions were finally becoming a reality. 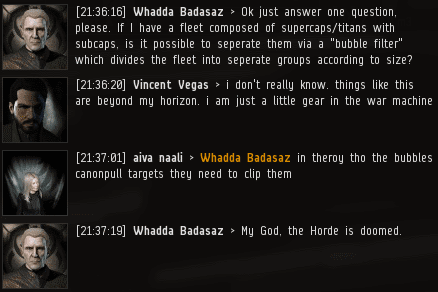 aiva's precious secrets spilled freely into the NOL public channel. He felt that he was among friends--but who else was listening? 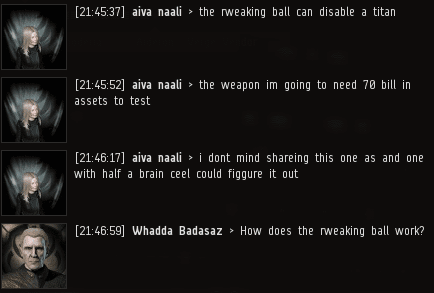 Even in such a comfortable atmosphere, aiva should have been alarmed by the degree of specificity with which his friends questioned him. Did they really need all of these technical details?

Security concerns were out the window. In fact, they were long gone. Before long, aiva was sketching diagrams of his plans: 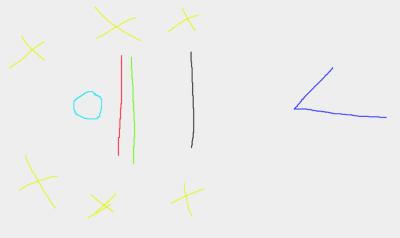 So far, it was all fun and games. But if word leaked out, things could go bad in a hurry.