If EVE is still around in 7 years, we'll be right here waiting for him. Welcome to the one hundred ninety-fourth edition of the Highsec Miner Grab Bag!

Even "newbies" are well-versed in the Phantom Provision these days. Our Code is so famous that new players have already read stuff that's not in it. 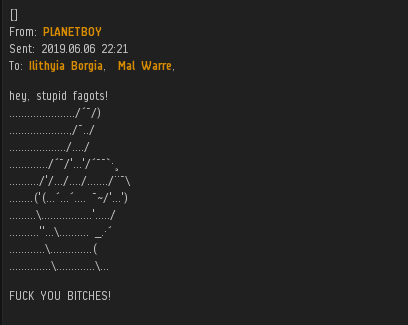 Once you take away the "newbie" excuse, the miners have little but ASCII copypasta to work with.

Technically speaking, "You're like ALOISOVICH" qualifies as a Miner Bingo square. 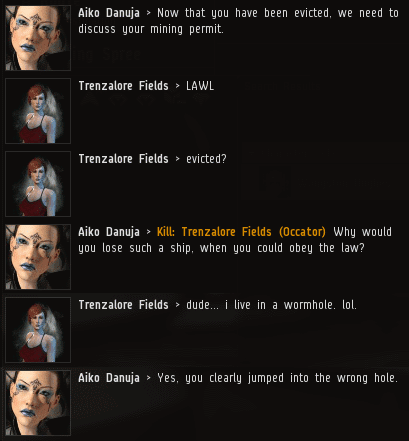 The elite PvP reputation cultivated by some wormholers has taken quite a hit in the past few months. Highsec PvP remains the endgame. Carebears say that highsec PvP causes players to end their game, right?

Singedislife420 Sunji accused our Agent of costing him 500k "for nothing". Apparently miners expect party favors with their ganks.

Is there any situation a miner can't mischaracterize in a one-line EVEmail?

The grammar is a bit confusing, but Ruth Doyle claimed that what you are in game is what you are in real life. She then declared herself a "sick piece of shit". Again, her grammar was poor.

Typical miner: "I didn't have any problems with the law until I got busted for breaking the law."

Kelson Katelo despaired that his permit didn't enable him to safely mine AFK. But the question he should've asked is, what's the point in mining AFK? You're just going to get ganked.

Another case of poor grammar. I believe this miner confessed to being a bot-aspirant, though.

Carebears accuse our Agents of trying to harvest tears from the miners. Actually, our Agents' follow-up EVEmails provide the carebears with an opportunity to redeem themselves...

Besides, there's no need to "harvest" something that flows so freely as a consequence of normal, legitimate gameplay.
Posted by MinerBumping at 18:02