Previously, on MinerBumping... Highsec miscreants hired gunman and Thor Argentus Odinssonn of the do-nothing, quasi-NPC Strategic Exploration and Development Corp squealed and raged when they were confronted with evidence of their bot-aspirancy.

Incredibly, Thor toyed with the notion of campaigning to become Saviour of Highsec--about 7 years too late. In any event, he voted* for me.

It was clear that Thor had no ideas; he simply felt like calling everyone else a Nazi. Maybe he was serious about entering politics after all.

Agent Madame Mia observed Thor's treason and instructed the miner to take it down a notch. Committing treason is bad for miners' blood pressure.

hired gunman, Thor's partner in crime, chose not to join in the politicking. But neither did he buy a mining permit.

Since its inception, the New Order has been crystal clear about it not being a cult. Anyone who says otherwise is spreading conspiracy theories, and is therefore unable to bask in the joys and happiness of the Code's light. Too bad for them.

Agent Madame managed to silence the miners by ganking one of their corpmates right in front of them. But this act would not go unanswered forever.

Following the destruction of Thor's 490 million isk Retriever a few days later, Thor placed a bounty on the mighty CODE. alliance. This did nothing but add another 100 million to his cumulative losses.

Thor immediately added another 400 million isk to the bounty. But, angry as he was, even Thor must've realized that his wallet was going in the wrong direction.

...Yet the miner could not contain his rage. As his downward spiral continued, Thor washed out of his corp and started a new one of his own.

The corp description of the newly formed Nebiru Industies [sic] and Exploration contained a lot of "we" and "us" for a one-man corp. 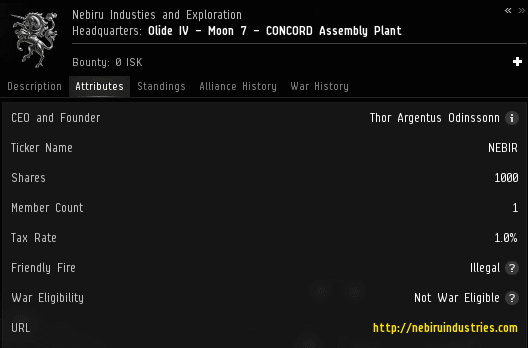 Nevertheless, Thor put enough effort into the corp to create a website for it. 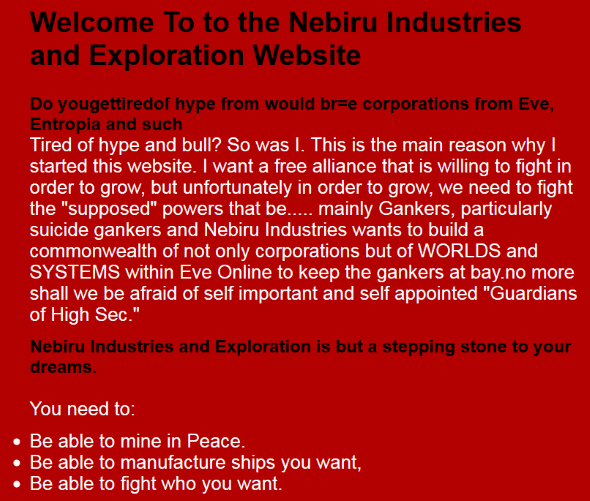 "Effort" may be the wrong word, actually. Thor remains unlicensed and unworthy of highsec.
Posted by MinerBumping at 18:03